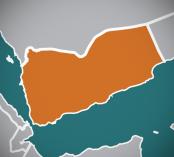 SANAA, Yemen (AP) — An airstrike hit a hospital supported by Doctors Without Borders in northern Yemen on Monday, the international aid group said, killing and wounding an unknown number of people.

The group, known by the French acronym MSF, said the strike hit near the Houthi rebel stronghold of Saada, where teams were still attending to the wounded. Yemeni security and medical officials, who spoke on condition of anonymity because they weren't authorized to brief the media, say the strike killed and wounded some 20 of the hospital's staff and patients.

On Saturday, an airstrike on a school killed at least 10 children and wounded dozens more, Yemeni officials and aid workers said. The Saudis denied hitting a school, saying the target was a Houthi training camp and accusing the rebels of recruiting children.

Earlier this month, the coalition acknowledged that it had committed "unintended bombings" that caused civilian casualties during its nearly 18-month air campaign, blaming U.N. agencies for not coordinating with it.

MSF, which operates in conflict zones around the world, has had a number of its facilities attacked over the past year.

The group said in May that at least 100 staff members, patients and caretakers were killed, and another 130 were wounded, in aerial bombing and shelling attacks on more than 80 MSF-supported and run health structures in 2015 and early 2016.

The article continues on the Associated Press website at: http://bigstory.ap.org/article/cef94e156b2940e9b54aef647d297a61/airstrike-hits-aid-groups-hospital-northern-yemen?utm_campaign=SocialFlow&utm_source=Twitter&utm_medium=AP