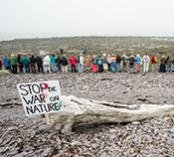 Nurses know the results of violence because we have, with our own hands, helped to mend wounds, to save lives, to weave back together what has been broken. Where there is pain, you will always find healers. It is our calling.

So it was with great horror this week that nurses watched the land and water protectors at Standing Rock — those who have peacefully resisted the Dakota Access pipeline project — be attacked by a militarized force of police and armed guards.

The protectors are healers in their own right, shielding their sacred lands and the water supply of up to 10 million people from contamination. As if it were not enough to hear reports of peaceful protectors being shot with rubber bullets, tased and tear gassed, however — nurses were appalled to learn that one group specifically targeted for attack and arrest was the medics.

Volunteer nurses with National Nurses United’s Registered Nurse Response Network have been on site at Standing Rock, assisting with medical aid. Our next rotation begins in November, and in the meantime, we are in touch with our fellow healers on site, who have shared reports of medics being specifically targeted — one being tased in the face. Online reports echo these stories of medics being pulled from their clearly marked vehicles, in their clearly marked medic uniforms, and being shot with beanbag rounds and arrested.

Let’s be clear; only one group came dressed for war this week: the police and armed guards. And while this is a peaceful resistance to a public health crisis, not war, nurses feel duty bound to publicly condemn those who came dressed for war. We condemn them for violating not only the rights and safety of the protectors (a violation under review by Amnesty International USA) , but also violating a basic, international law of humanity, even in times of actual war: medical facilities and medics themselves are not to be targeted.

The attack of medics at Standing Rock speaks to a larger issue, as we have recently seen hospitals and medical staff specifically targeted during conflicts in Syria, in Afghanistan, and elsewhere. As nurses, we will go to all lengths to protect our patients, so we have to wonder: When the targets of violence are those who can tend to its outcome — are we not left with a world where what’s broken has no possibility of ever being mended?

Is this the world we want to live in? A world of absolutely unchecked violence and pain? Nurses won’t stand for that world. Instead, we will stand with the protectors at Standing Rock, and with our fellow caregivers, the medics — to say that DAPL is bad for public health, and those enforcing its construction cannot speak to its safety while simultaneously targeting for attack the very people with the power to heal.

This post was originally published by National Nurses United at http://www.nationalnursesunited.org/blog/entry/attacking-the-medics-of-standing-rock-violates-basic-laws-of-humanity/.

Photo by Nina Grossman in the public domain