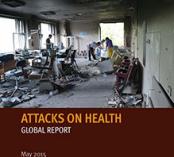 (Geneva, May 20, 2015) – Attacks on medical facilities, health workers, and patients have occurred in at least 17 countries undergoing conflict and civil unrest since January 2014, Human Rights Watch and the Safeguarding Health in Conflict Coalition said in a joint report issued today. The report was released at the annual meeting of health ministers from around the world in Geneva from May 18-26, 2015.

The 22-page report, “Attacks on Health: Global Report,” highlights recent attacks in countries around the world. Over the past year armed groups have attacked hospitals, clinics, and health personnel in 41 incidents in Afghanistan and deliberately killed over 45 health workers, primarily polio vaccinators, in Nigeria and Pakistan. In Syria, where medical facilities in Aleppo have been hit with government barrel bombs, 194 medical personnel have been killed and 104 medical facilities attacked since 2014.

“The UN General Assembly called on member countries in December to take concrete steps to improve protection for health workers,” said Leonard Rubenstein, chair of the coalition, which includes more than two dozen human rights, health and health professional, and other nongovernmental groups. “However, ongoing targeted attacks on health facilities and violence against health workers, and the absence of a robust system of accountability for them, indicates that much more needs to be done.”

The World Health Organization should fast-track its initiative to develop systems to collect and disseminate information on attacks on medical facilities and personnel, Human Rights Watch and the coalition said. They also urged governments and non-state armed groups to do more to prevent attacks and to hold accountable those responsible.

The organizations described attacks in South Sudan, where 58 people were killed in four hospitals in a series of attacks in early 2014, and in eastern Ukraine, where it is estimated that 30 to 70 percent of health workers have fled the region because of insecurity. In Yemen, Al-Qaeda in the Arabian Peninsula (AQAP) militants carried attacked health facilities in early 2014, and the 10-country Saudi-led coalition conducted air strikes that hit hospitals and interrupted medical supplies during the conflict in early 2015. Relying on data from Insecurity Insight’s Security in Numbers Database, the report also shows trends in attacks on health care over the course of a decade in South Sudan and Central African Republic.

The organizations also looked at government actions affecting health care during conflicts. Turkey, for instance, passed a law criminalizing the provision of emergency care without official authorization, potentially subjecting health workers to imprisonment for one to three years for treating injured protesters.

The groups also noted some progress in the global response, such as the December 2014 UN General Assembly resolution, which strengthens the norms of protection as a key element of the right to health, and the increased leadership provided by the World Health Organization.

The report was released in conjunction with an online map of attacks on health care produced by Physicians for Human Rights. The interactive map documents attacks, providing background on each country and highlighting illustrative and egregious examples of attacks that occurred between January 2014 and April 2015.

“Instead of being protected, medical care is actually a target,” said Donna McKay, executive director of Physicians for Human Rights, a member of the coalition. “In Syria in the past month, there were at least 14 attacks on hospitals and deaths of seven medical personnel. The toll of assaults on health in almost two dozen countries shocks the conscience and demands a global response.”

The organizations also noted attacks on health workers in Guinea, Liberia, and Sierra Leone during the unprecedented Ebola outbreak. In each country, fear and distrust, including the belief that health workers were spreading the disease, led to attacks on health facilities and personnel. In Liberia, looters stole medical equipment, food, and bedding from an Ebola quarantine center in August, causing patients and health workers to flee. In Sierra Leone, health workers came under attack while trying to bury the bodies of five Ebola victims in September. And in Guinea, a crowd shouting “Ebola is a lie!” attacked health workers after a market was sprayed with disinfectant. Eight people, including health workers, local officials, and journalists providing information about Ebola, were killed in September with machetes and clubs. A Guinean court sentenced 11 people to life in prison for the deaths in April 2015.

“Attacks on health facilities and workers violate international law and interfere with fundamental protections of the right to health,” said Joe Amon, health and human rights director at Human Rights Watch, a member of the coalition. “Monitoring attacks can help us better understand how widespread this problem is but ultimately the UN and governments need to protect health workers and press for accountability against those responsible.”

“Attacks on Health: Global Report” is available at: www.safeguardinghealth.org/sites/shcc/files/attacks-on-health-global-report-2015.pdf