Bioethicist Calls on Congress to Protect Physicians in War Zones 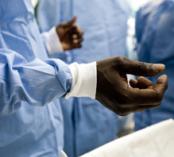 Greater leadership is needed from the U.S. government to protect physicians and health facilities from increased attacks in armed conflict zones like Syria, experts told members of Congress in a special briefing today.

“Adherence to norms won’t take place unless it becomes a diplomatic priority, with the U.S. and other states using their considerable leverage to demand adherence to international law,” Leonard Rubenstein, a bioethicist at Johns Hopkins Berman Institute of Bioethics specializing in protection of human rights in areas of conflict, said in a prepared statement. Rubenstein’s full statement appears at the end of this release.

The briefing was sponsored by Rep. Jim McDermott (D-WA), who introduced the Medical Neutrality Protection Act (H.R. 2643) in July 2011.

Rubenstein, also a faculty member at the Johns Hopkins Center for Public Health and Human Rights, noted a report last year by the International Committee of the Red Cross that over 1,800 people in 16 countries have been killed or wounded as a result of violence against health care services. Such attacks violate international laws of medical neutrality included in the Geneva Conventions.

Rubenstein said there is “reason for optimism” due to proactive steps by the World Health Organization and the Obama Administration to document abuses and provide more effective protection, but further action is necessary.

“We need a far more vigorous approach, where perpetrators face consequences for their abuses,” Rubenstein told members. “It is just a matter of will.”

Also speaking at the briefing were Nils Daulaire, M.D., Director of the Office of Global Health Affairs at the Department of Health and Human Services and the U.S. Representative to the Executive Board of the World Health Organization, and Richard Sollom, Deputy Director at Physicians for Human Rights.

Report of the International Committee of the Red Cross: Health care in danger: making the case: http://www.icrc.org/eng/resources/documents/publication/p4072.htm