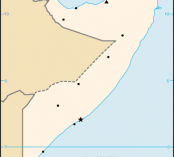 MOGADISHU (Reuters) - Medics who rushed to help victims of a huge bomb explosion in the Somali capital Mogadishu that killed more than 300 people say the country’s threadbare emergency services have been pushed beyond their limit.

From a lack of ambulance drivers to break-downs of the ambulances themselves, to checkpoints blocking routes to hospitals to a shortage of blood, the chaotic response to the deadliest truck bombing in Somalia’s history cost additional lives, they said.

Officials say that Saturday’s bombing, which also wounded at least 400 people, bore the hallmarks of the al Qaeda-linked al Shabaab, but the group has not claimed responsibility.

More than three days after the bombing at a busy intersection in the capital, hundreds of people were still searching for relatives in hospitals and trying to access the blast site, Reuters witnesses said.

Dr Abdikadir Abdirahman, director of Aamin Ambulances, a privately-funded ambulance service responding to the attack, described the limitations of his country’s emergency system.

”We have old ambulances and after working 24 hours for days, three broke down. The telephones got jammed and we had no

He said road blocks manned by the security forces delayed ambulances, and there were not enough medics to respond to the devastating attack.

Somalia has been mired in conflict since 1991, when clan warlords overthrew a dictator and then turned on each other.

One of the poorest countries in Africa, it faces severe food insecurity and relies on foreign donors to support its institutions and basic services.

One ambulance driver said security forces badly hampered efforts at the blast site and even fired at vehicles.

Ambulance driver Mohamed Saiid told Reuters: “I could see people screaming in a burning public vehicle and police opened fire refusing [help] that could save them.”

“When you want to save a screaming casualty but a soldier denies you access at gun point ... it is a tough work,” he said.

Such delays caused “many injured people to die from blood loss,” he said.

Another ambulance driver said police stopped him entering the blast scene. “I was stopped by forces at gunpoint as I was just some meters away from the blast scene,” said Mohamed Howle, a driver from a hospital in the city.

A spokesman for Mogadishu’s mayor said safety was the top priority in the response and there was no delay in rescuing injured people.

Spokesman Abdifatah Omar Halane said some injured people may have died while being carried from the scene: “No one can save the lives of someone whose brain mucus was oozing.”

Police officer Mohamed Hussein told Reuters he was at the blast site several times daily since the bombing and ambulances were not fired upon.

FIRING IN THE AIR

Soldiers often fire in the air in the city to clear traffic jams, he said, suggesting that guns may have been discharged by security forces to establish order.

Information Minister Abdirahman Omar Osman earlier said Somalia does not have a blood bank. But doctors said the public had responded quickly to calls for blood donations.

Countries including Turkey, Qatar and Kenya were providing medical assistance and evacuating wounded.

Osman said the bodies of more than 100 people buried on Monday “were blown beyond recognition”. He hoped other bodies could still be identified.

Mohamed Nur, head of the emergency unit at Medina hospital in Mogadishu said on Tuesday that doctors and nurses were working around the clock and the number of casualties had overwhelmed the hospital.

Turkish doctors, mainly surgeons and specialists in spine injuries, arrived along with Turkey’s health minister on Monday and were still treating injured in local hospitals, the minister said.

Medicine from neighboring nations Djibouti and Kenya arrived by plane on Tuesday, the minister said.

This article was originally published on Reuters website at http://www.reuters.com/article/us-somalia-attacks/chaotic-response-to-somali-bombing-cost-lives-medics-say-idUSKBN1CM198?il=0http://www.reuters.com/article/us-somalia-attacks/chaotic-response-to-somali-bombing-cost-lives-medics-say-idUSKBN1CM198?il=0