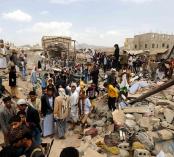 The ongoing air strikes and deliberate targeting of civilians and healthworkers in Yemen are jeopardising humanitarian operations in the country, denying thousands of people basic medical care, the head of Médecins Sans Frontières (MSF) has warned.

Dr Joanne Liu, MSF’s international president, said the bombing by the Saudi-led coalition and the shelling by the Shia Houthi rebels were increasingly targeting densely populated civilian areas and making it more difficult for her staff to do their jobs.

Speaking at the end of a visit to Yemen, Liu told the Guardian: “As well as hoping for a truce and a political solution to what’s going on, we need to protect the civilians who are now being targeted, and the medical activities.

Last week a Yemeni Red Crescent Society ambulance was attacked in the southern city of Taiz, and two of its occupants shot dead.

Although humanitarians were trying their best, said Liu, they were shocked and frustrated by both the ferocity of the fighting and the lack of respect for medical workers.

“Our teams are working in very difficult conditions, particularly in Taiz, where we live outside the enclave area,” she said.

“To get inside the enclave area, we have to cross the frontline twice and take the most amazing risk – you never know when you’re going to draw snipers who might not respect the ambulance and the flag and so 50% of the time, our medical team can’t reach the hospital. This is not something that we’re really used to.”

Liu said the situation in the northern city of Sa’dah – which has been pounded by coalition air strikes – was little better.

“Our team has spent countless evenings hiding in the basement of the hospital in Sa’dah waiting for the air strikes to finish so they can resume their medical activities. That doesn’t happen often in many of the conflict areas where we are, so this is a very peculiar working environment.”

MSF, which works in eight different areas of Yemen, has received about 7,000 war-wounded patients in the facilities it runs or supports since March. Last week, said Liu, more than 100 patients were treated in a single day in Taiz.

The five-day ceasefire announced last Sunday by the Saudi-led coalition, which is backed by the US and UK, broke down within hours, with reports of continuing fighting by the Houthi militia. Two previous humanitarian pauses have failed to take hold fully.

Liu said that while MSF was alarmed by the increasing trend on both sides towards deliberately targeting civilian areas, the naval blockade imposed by an Arab coalition was proving equally devastating.

“Both sides are inflicting immense suffering on the civilian populations but there’s a war of attrition going on that’s as deadly as the current conflict,” she said.

Aid worker in Yemen: 'We fear for our lives every day'

“Since the UN security council resolution in April, there has been a weapons embargo on the country and its secondary impact has been on the supply of vital goods for the country. More than 90% of the food – and 100% of the medical supplies – are coming from outside, but because of the embargo, there’s a blockade on food, on fuel and on medical supplies.”

She said that people with chronic diseases were being denied access to vital medicine, adding that eight patients on dialysis had recently died.

“This has as much impact as the conflict itself,” she said. “We have to be aware – countries like the UK – that we are co-opting this second war of attrition in Yemen right now.”

Nearly as destructive, said Liu, was the psychological and emotional stress that the conflict was visiting on ordinary civilians.

“As humanitarian aid workers, we are used to conflict; we are used to war; but I think the threat of an air strike on you is something that’s very difficult to live with. I keep hearing the air strikes and I can tell by the sound that it’s not too far. It always gives you the shivers and always puts you under tension.

“I haven’t slept through a night since I’ve been here – and this is just a small thing: I’m here for two weeks and millions of people have been here since the beginning of the conflict, and this is what they have gone through for four months. They live with fear; they live with uncertainty; no one knows what tomorrow will be made of.”

Earlier this week, Oxfam warned that nearly 25,000 people a day have slipped into hunger in Yemen over the past four months, with every second person – or nearly 13 million people – now struggling to find enough to eat.

On Thursday, the UN World Food Programme (WFP) said it had begun distributing food to about 340,000 people in eight of the worst-affected areas of the southern port city of Aden.

The WFP said that all but one of the areas had not been reached since April, adding that the rations – including wheat flour, pulses and cooking oil – were intended to last two months.

“We are challenging the odds to reach tens of thousands of people who would go hungry without food assistance,” said Muhannad Hadi, WFP regional director for the Middle East, North Africa, Eastern Europe and Central Asia.

“We are working to overcome insecurity, checkpoints and many other hurdles in Yemen to reach desperate families unable to feed their children.”

Houthi rebels seized the capital, Sana’a, in September and pushed south and east in March and April. In early July, the UN declared Yemen a level-3 humanitarian emergency, the highest on its scale, warning that nearly half the country’s regions were facing a food crisis.

This article was originally published on the Guardian website at: http://www.theguardian.com/global-development/2015/jul/30/yemen-civilians-hospitals-targeted-air-strikes-bombing-medecins-sans-frontieres