In Conflict Zones Worldwide, Medical Facilities and Personnel in 19 Countries Are under Relentless Attack 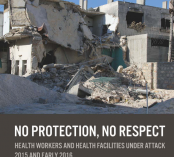 Washington, May 23, 2016 – In conflict zones around the world, health care workers and facilities are under relentless attack, according to a new report “No Protection, No Respect” from the Safeguarding Health in Conflict Coalition.

The coalition of more than 30 nongovernmental organizations found that during 2015 and the first three months of 2016, deliberate or indiscriminate strikes on health care have killed medical workers and patients, decimated medical infrastructure and robbed countless civilians of vital medical care in 19 countries around the world. The report also found that, in many instances, parties to conflicts failed to take required steps to avoid harm to medical facilities, staff and patients, and obstructed access to health care.

“The report shows both the pervasiveness and variety of attacks on health facilities, staff and patients globally,” said Leonard Rubenstein of the Johns Hopkins Bloomberg School of Public Health and the coalition’s chair. “Sometimes the attacks are deliberate, sometimes they’re a product of indifference to the harms caused and sometimes they represent gross failures to take steps needed to prevent death and injury—but all violate long-standing obligations under international law.”

In its third annual report, the coalition found evidence that hospitals and ambulances were specifically targeted in Afghanistan, Central African Republic, Iraq, Mali, South Sudan, Syria and Thailand, and reports on the murder and kidnapping of polio vaccination teams in Afghanistan, Nigeria, Pakistan, and Somalia. Overall, the report shows an alarming frequency and variety of attacks—which deprive countless people of critical medical care.

“In Afghanistan, Iraq, Syria and Yemen, aerial strikes have decimated hospitals and clinics, killing doctors and the patients they are so desperately trying to treat,” said Susannah Sirkin, director of international policy and partnerships at Physicians for Human Rights. “These attacks terrorize and inflict suffering on patients and health care providers. Turning hospitals into battlefields is a grave breach of humanitarian law and an affront to humanity.”

The report describes the burning and looting of hospitals and clinics, as well as brutal attacks on medical staff and patients in facilities in the Democratic Republic of the Congo, Iraq, South Sudan, Sudan and Yemen. The coalition also found that the passage of ambulances, medical supplies, or patients seeking care were routinely restricted in Central African Republic, Mali, the Occupied Palestinian Territory, Syria, South Sudan, Turkey and Ukraine.

"Perpetrators clearly believe they will suffer no consequences if they attack or interfere with patients, doctors, nurses and hospital staff,” said Laura Hoemeke, director of communications and advocacy at IntraHealth International, a coalition member. “The international community’s failure to halt such attacks has sparked a chain reaction of impunity.”

Among its recommendations, the coalition report calls on the United Nations Secretary-General and the World Health Organization to carefully document and report attacks on health care workers and facilities. The coalition also recommends that the UN Security Council refer such crimes to the International Criminal Court or other tribunals if states fail to fulfill their obligation to halt strikes on health care personnel and infrastructure.

On May 3, the Security Council condemned attacks on health facilities and health workers, reiterating the fundamental principle of the laws of war—that health facilities and medical workers must be protected from attack in armed conflict. It called on countries to take steps to prevent such attacks, investigate them when they happen and prosecute perpetrators.

“The Security Council resolution was a welcome first step,” said Diederik Lohman, health and human rights director at Human Rights Watch, a coalition member. “But the true test comes with its implementation.”