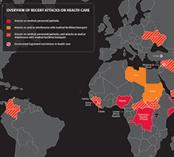 As Syrians suffer from the extreme destruction of their health care system at the hands of the military, their situation has brought increased attention to attacks on health care around the world. Health professionals, facilities, and patients are regularly targeted by violence and restrictive legislation in situations of conflict and civil unrest, according to an online, interactive world map of attacks on health published today by Physicians for Human Rights (PHR).

“These attacks shock the conscience. By failing to respond effectively, the world has allowed for a new normal to take hold, whereby medical care is specifically targeted, instead of protected” said Donna McKay, PHR’s executive director. “These unlawful and preventable attacks have resulted in decimated health care systems, depriving people of adequate care and making the population fearful of seeking assistance.”

PHR’s map illustrates attacks on medical personnel, patients, facilities, and transport, along with government-legislated restrictions to health care, in 20 countries experiencing armed conflict, political instability, or a national crisis. The attacks – resulting from systematic targeting by security forces and armed groups effectively using this tactic as a weapon of war, a disregard for civilian facilities during conflict, or distrust by local communities – are obstructing treatment and corroding international norms.

The assault against health care extends beyond physical violence to legislation in Syria, Burma, and Turkey that effectively criminalizes the provision of medical care to punish subsets of the population. These policies have led to insecurity for doctors and medical aid groups, legal charges and fines against doctors in Turkey, the detention and torture of hundreds of medical personnel in Syria, and a severe lack of health care for certain populations.

PHR’s interactive map was launched in conjunction with a report by Human Rights Watch and the Safeguarding Health in Conflict Coalition, released at the World Health Organization’s annual meeting of health ministers. In recognition of the increasingly acute perils faced by medical workers, the U.N. General Assembly called upon states to protect health workers in a December 2014 resolution. Nonetheless, violations continue unabated.

The full article continues at http://physiciansforhumanrights.org/press/press-releases/conflicts-and-crises-spawn-attacks-on-health-care-worldwide on the PHR website.