Despite Threats, Thousands Join Anti-Polio Drive in Pakistan, a Last Bastion of the Disease 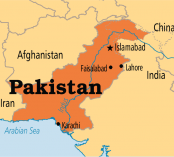 KARACHI/ISLAMABAD (Reuters) - More than 100,000 health workers fanned out across Pakistan on Monday, stepping up a drive to eliminate the polio virus this year from one of its last bastions, despite continuing militant threats to vaccination teams.Pakistan accounts for more than 70 percent of the world's cases of polio, a virus that can cause lifelong paralysis and is now endemic in only two countries, Pakistan and Afghanistan."We have intensified our efforts," said Asher Ali, a project manager in the southern city of Karachi for Rotary International Pakistan, one of the groups involved in the effort. "If we take normal action, it will never be eradicated."

Pakistan's polio cases are declining, with just 54 cases of wild polio virus reported last year, down more than 80 percent from 2014, when the country suffered a large spike in cases.The latest immunization push aims to finish vaccinating every child in the country by the end of May.

Efforts to eliminate polio in Pakistan have been complicated in recent years, as polio workers have faced attacks by militants who say the health teams are Western spies, or that the vaccines they administer are intended to sterilize children.

In January, a suicide bomber killed at least 15 people outside a polio eradication center in the restive western city of Quetta, with two militant groups claiming responsibility.Both leaders of the national anti-polio campaign and security personnel said attacks on the immunization teams have declined in the face of improving community acceptance and coordination with security forces."When I started work, I was frightened," said community health worker Zubaira Bibi, standing near police assigned to accompany her team in Karachi. "Now I'm not scared. People in the area know us now."

The image of vaccination suffered by association after a CIA-employed Pakistani doctor used the guise of a vaccination campaign to spy on Osama bin Laden in the months up to the U.S. raid that killed the al Qaeda chief.Some parents still refuse to let the immunization teams, who go door to door, administer the vaccine to their children."There are refusals," said Rehana Bibi, who wore a veil during her day's work visiting homes in the Sultanabad neighborhood in Karachi."But we try to convince them that there is no harm in giving drops to children."

(Reporting by Syed Raza Hassan in Karachi and Krista Mahr in Islamabad; Writing by Krista Mahr; Editing by Clarence Fernandez)