Doctors in the Crosshairs: Four Years of Attacks on Health Care in Syria 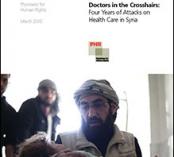 Four years after the start of the civil war in Syria, deliberate and indiscriminate attacks have decimated the ranks of health professionals and devastated the medical infrastructure, exacerbating an acute humanitarian crisis, Physicians for Human Rights (PHR) said in a report released today.

The PHR report and interactive map tracking these violations document the unlawful killing of 610 medical personnel and 233 illegal attacks on 183 medical facilities throughout the country over the past four years. More than 64 percent of medical personnel killed in the past year were targeted for their lifesaving work or killed in the line of duty, the highest proportion seen during the war. In 2014, on average, a medical worker was killed every other day in Syria, and a hospital was bombed or shelled every four days.

The Syrian government has committed the vast majority of these attacks, and – in violation of human rights and humanitarian law – has systematically targeted health care services since the start of the conflict in 2011. While non-state armed groups have also perpetrated attacks, Syrian forces are, in fact, responsible for 88 percent of the recorded hospital attacks and 97 percent of medical personnel killings over the past four years, with 139 deaths directly attributed to torture and/or execution, the PHR report found.

“The Syrian government has resorted to every tactic: emergency-room arrests, hospital bombings – including barrel bombs – and even the torture and execution of doctors who attempt to treat the wounded and sick,” said Erin Gallagher, PHR’s director of investigations. “Every doctor killed or hospital destroyed leaves hundreds or even thousands of Syrians with nowhere to turn for health care.”

Attacks on medical professionals, facilities, and the transport of supplies during armed conflict violate the Geneva Conventions. When the attacks are as widespread and systematic as they are in Syria, they constitute crimes against humanity. PHR’s new report highlights overwhelming evidence that attacks on health care are a deliberate campaign. The effectiveness of this tactic is evidenced by a rapid escalation in attacks, which tripled in number between the first and second years of the conflict.

In 2011, the government positioned snipers on the roof of Daraa National Hospital, where for two years, they fired at the sick and wounded to ensure only government supporters could enter and obtain medical care. In January 2014, government forces began their illegal barrel bomb campaign with attacks in densely populated civilian areas of Aleppo and Damascus. PHR has documented 32 barrel bomb attacks on 24 medical facilities over the past four years.

“In Syria, a doctor can be detained and tortured just for being caught at a checkpoint with a roll of gauze,” said Donna McKay, PHR’s executive director. “World leaders must not allow this onslaught against medical personnel to become the new normal in conflict.”

The full article continues at http://physiciansforhumanrights.org/press/press-releases/doctors-in-the-crosshairs-four-years-of-attacks-on-health-care-in-syria.html on Physicians for Human Rights’ website. PHR is a steering committee member of the Safeguarding Health in Conflict Coalition, a group of over 30 organizations who share a commitment to the protection of health workers, services, and infrastructure from violence. Members include notable academic institutions, international and country-level NGOs with a strong focus on human rights and/or health, relief organizations, and professional associations. The secretariat is shared by IntraHealth International and the Center for Public Health and Human Rights at the Johns Hopkins Bloomberg School of Public Health.