In the DRC, Maternity too Often Means Mortality 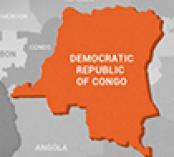 MASISI, Democratic Republic of Congo — Mariam Rizik crossed a grassy clearing, walking toward the clinic for her five-month prenatal appointment. Once there, her best green wax print outfit blended into the rainbow of dresses worn by the women who gathered, bellies bulging, for their checkups.
Rizik lives in Lukweti, a village in the Congo rain forest, the second-largest tropical forest in the world. Lukweti is also one of the centers of the diffuse, protracted war in eastern Congo. Four of the mountains that ring the clinic were claimed at different points by one of the armed groups, making Rizik’s previous five pregnancies terrifying.
The clinic walls were water stained, the door to the maternity ward broken and patched with cardboard. The pharmacy consisted of two shelves of folic acid and malaria medicine. This, the only functional health center serving the 6,514 people in this administrative zone, suffered from more than neglect; the Congolese army had pillaged the government-run clinic in March.
The conflict, which has afflicted eastern Congo since the 1990s, has severely weakened the health system, with clinics ransacked, medical workers evacuated and others refusing to work in hot zones. Pregnant women are one of the vulnerable groups swept up in the tumult, and Congo has one of the highest maternal death rates in the world, with 846 per 100,000 live births. (In the U.S., there are 18.5 per 100,000.)
The clashes between armed groups often take place in remote, rural villages like Lukweti, receiving attention from the international media only when they migrate into larger towns or when massacres add dozens to the death toll. Otherwise, the toll climbs quietly and steadily as people die in smaller clashes and from secondary causes such as maternal mortality, malnutrition and treatable diseases. An estimated 5.4 million people have died since 1998 in the conflict; most were civilians.
The full article continues at http://america.aljazeera.com/multimedia/2015/2/in-the-drc-maternity-can-mean-mortality.html# on Al Jazeera America's website.
Share to: