On the Frontlines of Armed Conflict: A First Responder's Story 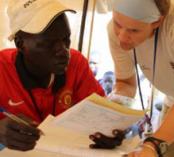 Emergency room nurse Nora Hellman is a frontline health worker who has responded following natural disasters and during armed conflicts around the world to provide lifesaving medical care. With a background in wilderness medicine, Nora has deployed to extremely difficult working conditions with International Medical Corps but is quick to point out the courageousness and hard work of the local staff she worked alongside throughout numerous disasters. She reminds us that after her assignments, she was able to go home but the nationals she worked with and helped train to become First Responders are still there continuing to work on critical humanitarian programs.

Nora first deployed to Haiti following the devastating earthquake in 2010 and then again to respond to the cholera outbreak the following year. After Typhoon Haiyan ravaged the Philippines in late 2013, Nora again used her emergency medicine training to provide relief after a natural disaster. However, the following assignment during armed conflict in South Sudan proved to be extremely challenging for the now seasoned First Responder.

“Providing health care in a conflict area is very different than doing so in one affected by a natural disaster,” Nora said. “It is dangerous; I did not always feel safe. No one did. It is emotion – you see firsthand men, women and children hurting each other. Probably the most stressful thing about working in a conflict area – you never know what is going to happen on a given day – the situation is dynamic, change is the only constant and reliable information is hard to come by.”

The conflict in South Sudan has now uprooted 1.1 million people and men, women and children who continue to flee their homes in search of safety from violence but they still face dangers such as hunger, disease and other medical concerns. Nora worked for almost two months at the United Nations base in Malakal, a remote oil town in the northern part of the country that experienced many episodes of violence.

Nora doesn’t like to dwell on the horrible things she saw. Instead she takes a more hopeful approach, focusing on the ‘smart, competent and dedicated’ South Sudanese she worked alongside. “These people are students, trained by International Medical Corps. We believe that community members are their own best First Responders, given the proper tools and educational opportunities. They are always there first and they always stay after everyone else leaves.”

Nora worked side-by-side in Malakal with a group of six student nurses who fled their school in Juba when the fighting became too intense. “Our team of doctors, nurses, and midwives worked with them and trained them – we educated them on how to assess and treat children with diarrhea and dehydration, recognition of severe malaria cases, how to screen for and treat malnutrition—things they should have been learning in school.”

Nora marveled at these young men’s tireless work ethic. They saw hundreds of patients every day who needed everything from basic medication to treatment for stab wounds. Once, during a particularly dangerous day of fighting near the compound, Nora and other staffers were forced to take shelter in a bunker. However, these young men braved the violence and opened the clinic themselves to treat over one hundred fellow South Sudanese wounded from the fighting that day.

Today these young nurses continue to use their training to provide medical care to vulnerable community members in South Sudan.

Nora said, “It was the greatest privilege of my life to teach, support and be with these young men as they learned the skills they will need to survive in South Sudan and usher the next generation into a more stable, peaceful, productive time.”