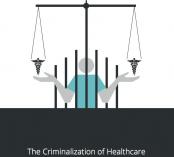 States are employing counter-terrorism and criminal laws to punish health professionals for performing their duty to treat everyone in need, according to a new report.

“The Criminalization of Healthcare,” by the University of Essex Human Rights Centre, the Center for Public Health and Human Rights at the John Hopkins Bloomberg School of Public Health, and the Safeguarding Health in Conflict Coalition, is the first of its kind to review laws, prosecutions and other forms of state-inflicted violence in multiple countries against healthcare providers for treating alleged terrorists or enemies.

Of the 16 countries reviewed, at least 10 have laws that have been or could be used to prosecute the provision of healthcare to people in need as a form of supporting terrorism. The research was requested by the United Nations Special Rapporteur on the right to health, Dainius Pūras.

“It is alarming to see that more and more health providers around the world face threats for doing their job to treat the sick and wounded,” Pūras said. “Instead of protecting them, domestic laws are often being used to punish them. We must amend counter-terrorism laws and policies that are contributing to this disturbing trend, and ensure everyone from ambulance drivers to doctors can work without fear of prosecution or sanction.”

The 30-page report discusses how legal frameworks and justice systems in increasing numbers of countries are criminalizing healthcare:

While healthcare is largely criminalized in the countries examined, the report highlights promising best practices for safeguarding the provision of healthcare, including recent legislation in Afghanistan, Colombia and Nigeria. The report includes a list of recommendations for states and UN political organs.

“International law has long prohibited punishment of doctors and other health workers for caring for people in need,” said Marine Buissonniere, one of the report’s authors. “States should reform their laws to guarantee that people who are wounded and sick receive care, no matter their affiliation or status. Whether an ally or a foe, every human being is entitled to medical care.”

The Human Rights Centre at the University of Essex brings together students, alumni and more than 100 members from 11 disciplines to work on issues at the interface between the theory and practice of human rights. https://www1.essex.ac.uk/hrc/

The Safeguarding Health in Conflict Coalition is a group of international nongovernmental organizations working to protect health workers, services, and infrastructure. https://www.safeguardinghealth.org/

The Center for Public Health and Human Rights at the John Hopkins Bloomberg School of Public Health’s works to advance understanding of the critical links between health and human rights. https://www.jhsph.edu/research/centers-and-institutes/center-for-public-health-and-human-rights/index.html

Dr. Dainius Pūras is the Special Rapporteur on the right of everyone to the enjoyment of the highest attainable standard of physical and mental health. https://www.ohchr.org/EN/Issues/Health/Pages/SRBio.aspx