Health Workers and Patients Under Threat in 17 Countries, Report Finds 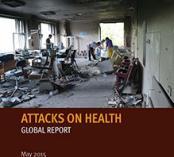 Geneva—Health workers, patients and medical facilities have come under attack in 17 countries since the start of 2014, a coalition of 24 nongovernmental organizations said in a report released Wednesday that urged a greater international effort to protect health services.

The report was released jointly by Human Rights Watch and theSafeguarding Health in Conflict coalition as health ministers met in Geneva for the World Health Assembly, the World Health Organization’s decision-making body. It aimed to refocus attention on a lethal threat that has yet to be reported systematically.

“There is no global overview of the problem,” Leonard Rubenstein, chairman of the coalition and director of the Johns Hopkins program on human rights, health and conflict, said in an interview. “The fact that 17 countries are implicated indicates the scope of the problem. We think it is a lot bigger than this.”

A United Nations resolution in December called on states to take specific measures to protect medical personnel and enhance access to health services, but “nearly every day there are reports of attacks and indications that more needs to be done, and faster,” according to the report.

In Syria alone, 194 medical personnel were killed during the 15 months ending in March, according to New York-based Physicians for Human Rights. They died in 104 documented instances, 88 of them reportedly conducted by government forces that United Nations investigators say have systematically targeted health facilities in opposition-controlled areas with barrel bombs, rockets and sniper fire.

“Health care has been so militarized that many in need forgo medical assistance in hospitals for fear of arrest, detention, torture or death,” the coalition reported, citing the findings of United Nations investigators as well as news reports detailing indiscriminate attacks by Islamic State militants. But even in Syria, “there is a general perception that attacks are underreported,” Mr. Rubenstein said.

The coalition also cites reports of 25 health workers, mostly poliovaccinators, killed early last year by fighters with Boko Haram, a Nigeria-based extremist group; 58 people killed in attacks on hospitals in South Sudan; and assaults on medical facilities by armed groups in Yemen and the disruption of medical services caused by the Saudi-led coalition’s airstrikes there. “Most of the victims are local health workers,” Mr. Rubenstein said.

Reinforcing those findings, the International Federation of Red Cross and Red Crescent Societies said that 52 national staff members and volunteers had been killed in the conflict in Syria and that this year its national societies had sustained casualties among volunteers in Yemen, Mali, Sudanand Myanmar as well as Syria.

“In the last two weeks, there has almost not been a day when I didn’t sign a letter of condolence,” Elhadj As Sy, the federation’s secretary general, said in an interview in late April after a spate of killings. “People are losing their lives when they are trying to save lives.”

The coalition report, however, also exposed nonviolent action against health care staff members. Turkey, in a crackdown on demonstrations against the government, passed a law last year that criminalizes emergency health care provided without official permission. The authorities charged two doctors who helped protesters with “protecting perpetrators by extending them first aid.”

“Attacks on health facilities and workers violate international law and interfere with fundamental protections of the right to health,” Joe Amon, health and human rights director at Human Rights Watch, a member of the coalition, said in a statement released with the report.

He added, “Monitoring attacks can help us better understand how widespread this problem is, but ultimately the U.N. and governments need to protect health workers and press for accountability against those responsible.”

Health ministers meeting in Geneva two years ago mandated that the W.H.O. set up a system for monitoring attacks on medical facilities. By releasing the report to coincide with this year’s meeting, the coalition hoped to “put a little bit of pressure on the W.H.O. to push ahead,” said Richard Pearshouse, a spokesman for Human Rights Watch.