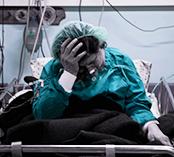 In the last 4 years of conflict in Syria, there has been an estimated 610 deaths of healthcare professionals and 233 deliberate attacks on healthcare facilities[1]. Despite being explicitly prohibited by international law, healthcare facilities are one of the first targets in conflict situations–whether to deprive opponents of medical care, to create terror, or to use hospitals and ambulances as a cover to gain military advantage. Healthcare workers face such dangers on a daily basis while also being targets of threats, kidnapping or violence themselves; for example, because of perceived partiality to a particular political or religious ideology, or not giving preferential treatment to armed personnel.

The consequences of such violence can be devastating. For the wounded and sick, this means a loss of reliable healthcare when they are most in need, which is also exacerbated by obstructions to access such as roadblocks or checkpoint securities. The loss may not only be material: the long-term loss of health knowledge may prove unrecoverable, such as in Liberia where decades of war have reduced the number of health workers by 28% and destroyed 70% hospitals [2].

In December 2014, the UN General Assembly passed a resolution calling for concerted and specific actions by States to protect healthcare workers in situations of conflict [3]. It is another question, however, whether such international action can be upheld in the reality of conflict situations. Further, there is the question of how far the West can act as moral arbitrators when they are not necessarily neutral in those conflicts themselves. In such cases, then, perhaps the key lies in organisational-level changes: the International Committee of the Red Cross, for instance, engages in practical initiatives such as physical reinforcement of healthcare facilities, taking facilities underground, retrieving weapons at hospital entrances, or fast-tracking healthcare vehicles at military checkpoints.

Most of all, it is imperative that healthcare facilities and personnel remain impartial to maintain their protected status. The misuse of healthcare facilities for military purposes can lead to a loss of trust in the neutrality of the healthcare system, such that they become validated as targets for further attacks in a vicious cycle. Healthcare workers must strive to provide the same care for all patients regardless of their positions in ongoing conflicts, and must not be put in an environment where they are coerced to do otherwise.

Our teams in Oxford and London have been commissioned by the Royal Society of Medicine to investigate the ways in which organisations and individuals become involved in such issues. In particular, we aim to focus on how conflicts affect the individual: often, workers in conflict situations are young and less trained, and must balance their clinical responsibilities with their own safety. How should individuals decide when to stay, and when to go? Should healthcare workers always have military protection, even if that legitimises them as a target? Are there ways to provide support to the field from more experienced colleagues or institutions, perhaps via virtual technologies? Over the next few months we will be working in coordination with organisations such as Save the Children, MSF and ICRC to answer some of these questions and investigate the important, yet often neglected, issue of violence against healthcare.

Junko Takata is a graduate medical student at the University of Oxford. Prior to studying medicine she completed a BA in Natural Sciences and MPhil in Public Health at the University of Cambridge, as well as work in various public health institutions such as WHO and Chatham House.

This article was originally published on the Polygeia website at http://www.polygeia.com/healthcare-and-conflict/.