Hiding Behind the Coalition: Failure to Credibly Investigate and Provide Redress for Unlawful Attacks in Yemen 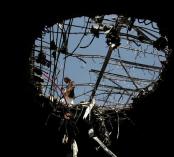 The armed conflict in Yemen, which escalated in March 2015, continues to kill, injure, and displace thousands of Yemeni civilians. As of August 2018, the United Nations Office of the High Commissioner for Human Rights (OHCHR) had documented the killing of 6,592 civilians and the wounding of 10,470 in Yemen, with airstrikes by the Saudi Arabia-led coalition causing the majority of the verified civilian casualties. Many millions more suffer from shortages of food and medical care. Despite mounting evidence of violations of international law by the parties to the conflict, efforts toward accountability have been woefully inadequate.

In August 2016, the coalition, then consisting of Saudi Arabia, the United Arab Emirates, Bahrain, Kuwait, Egypt, Jordan, Morocco, Sudan, and Qatar, announced the first results of the coalition’s recently created investigative mechanism, the Joint Incidents Assessment Team (JIAT). JIAT originally consisted of 14 individuals from the main coalition members. It has a mandate to investigate the facts, collect evidence, and produce reports and recommendations on “claims and accidents” during coalition operations in Yemen.

In this report, Human Rights Watch examines the way JIAT has investigated coalition compliance with the laws of war and civilian harm through a post-strike analysis. The report finds that more than two years after JIAT began investigating coalition airstrikes, its public findings continued to display many of the same fundamental problems of the body’s first findings. The limited information available to the public shows a general failing by JIAT – for unclear reasons – to provide credible, impartial, and transparent investigations into alleged coalition laws-of-war violations.

To illustrate some of Human Rights Watch’s concerns regarding JIAT’s work, this report describes factual and legal discrepancies between JIAT and Human Rights Watch reporting and analysis in 17 strikes.  JIAT’s public conclusions raised serious questions regarding the ways in which JIAT is conducting investigations and applying international humanitarian law. Others, including the UN Panel of Experts, Amnesty International, and Médecins Sans Frontières (MSF, or Doctors Without Borders), have reached similar conclusions about JIAT’s failings following their own inquiries into other strikes investigated.

Over the past two years, JIAT has failed to meet international standards regarding transparency, impartiality, and independence. Established in the wake of mounting evidence of coalition violations, the body has failed even in its limited mandate to assess “claims and accidents” that occurred during coalition military operations. JIAT has not only conducted its investigations without a transparent methodology, but appears to have regularly failed to conduct a thorough laws-of-war analysis in its investigations and produced flawed and dubious conclusions. JIAT appears only to have investigated coalition airstrikes, but not other alleged violations of international law by coalition members, such as UAE abuses against people in detention. Saudi-led coalition aircraft struck three apartment buildings in Sanaa on August 25, 2017, killing at least 16 civilians, including 7 children, and wounding another 17,  including 8 children. After an international outcry, the coalition said that it carried out the attack, but provided no details on the coalition forces involved.  © 2017 Mohammed al-Mekhlafi

On July 31, 2018, JIAT reported it had investigated its 79th incident. Most JIAT statements are released on the official Saudi state news website, but not all investigations are numbered. Human Rights Watch reviewed statements JIAT released publicly in English and Arabic and news conferences conducted by the JIAT spokesman since August 2016, interviewed members of other organizations following JIAT’s work, and identified 75 of JIAT’s reports. It is unclear whether JIAT did not release the remaining four findings publicly, or if there is another cause for the discrepancy. In those 75 reports, JIAT:

JIAT provides no information regarding its decisions whether or when to release its investigation results. Three large batches of investigation results appear to have been released to respond to international events. JIAT released incident results on September 12, 2017 during discussions at the UN Human Rights Council regarding the possible creation of an international investigation into violations in Yemen; Saudi diplomats and their allies then used the released JIAT results to argue against the need for an international mechanism. On March 5, 2018, JIAT released results immediately before Saudi Crown Prince and Coalition Commander Mohammed bin Salman travelled to the United Kingdom to meet with senior British officials. And, on June 7, 2018, JIAT released results shortly before a planned major coalition offensive to capture Hodeida city, which had generated broad concerns that an attack on Yemen’s most important port would have dire humanitarian consequences for the population.

The United States, which is a party to the conflict because of its operational, logistical, and intelligence support to the coalition, and the UK, which supports the coalition, often claim the coalition has “improved” its targeting practices during the conflict.  As Saudi Arabia’s largest weapons suppliers, the US and UK have continued to sell billions of dollars’ worth of weapons to Saudi Arabia and other coalition states throughout the conflict. In six of the attacks investigated by JIAT discussed in this report, Human Rights Watch identified US-origin munitions used in the attack. Officials have asserted that the coalition’s efforts to investigate through JIAT indicate that Saudi Arabia and other coalition members are engaged in a good faith effort to comply with international humanitarian law.

Those countries that continue to sell weapons to Saudi Arabia—including the US, UK and France—risk complicity in future unlawful attacks, particularly given that coalition assurances to take action have proven hollow.

The coalition has repeatedly promised to minimize civilian harm in future military operations, but the coalition’s lack of transparency makes it nearly impossible for independent observers to analyze whether the coalition has in fact made changes, let alone enforced them. Human Rights Watch has continued to document coalition attacks in 2017 and 2018 that appear to violate the laws of war.

Impartial investigations into alleged laws-of-war violations are only the first step toward meeting international legal obligations regarding accountability for abuses and justice for victims. Human Rights Watch calls on coalition member states to meet their own obligations under international law to investigate alleged serious violations by their armed forces and persons within their jurisdiction, to appropriately prosecute military personnel responsible for war crimes, and to provide reparation to victims of unlawful attacks and support a unified, comprehensive mechanism for providing ex gratia (“condolence”) payments to civilians who suffer losses due to military operations, regardless of an attack’s lawfulness.

The coalition’s failure to comply with the laws of war goes far beyond the failings of any particular JIAT investigation. JIAT has only investigated a fraction of the coalition attacks that Yemeni and international rights groups and the UN have reported as raising laws-of-war concerns. Human Rights Watch has documented 88 apparently unlawful coalition attacks since March 2015—JIAT has investigated about a quarter of them. The UN and rights groups have documented dozens of other apparently unlawful coalition airstrikes. In many of these attacks, the coalition, coalition officials, or JIAT have failed to acknowledge the coalition’s role. A UN Panel of Experts found that, except for two of 10 attacks the panel investigated in 2017, the coalition had not “acknowledged its involvement in any of the attacks, nor clarified, in the public domain, the military objective it sought to achieve.”

Many of the apparent laws-of-war violations committed by coalition forces show evidence of war crimes – serious violations committed by individuals with criminal intent. JIAT investigations show no apparent effort to investigate personal criminal responsibility for unlawful airstrikes. This apparent attempt to shield parties to the conflict and individual military personnel from criminal liability is itself a violation of the laws of war. And Saudi and Emirati commanders, whose countries play key roles in coalition military operations, face possible legal liability as a matter of command responsibility – when a commander knows or should have known that subordinates were committing abuses yet took insufficient action to stop them or punish those responsible. Many senior officials in the Saudi and Emirati militaries, who have played a leading role in coalition operations throughout the conflict, remain in positions of power and authority.

While JIAT has recommended in a handful of strikes that the coalition provide “assistance” or take “appropriate action,” Human Rights Watch is unaware of any concrete steps the coalition has taken to implement a compensation process or to hold individuals accountable for possible war crimes. Exceptionally, the Yemeni National Commission to Investigate Alleged Human Rights Violations reported the government of Yemen had referred several Yemeni officers to a Yemeni military court for prosecution.

On July 10, 2018, Saudi Arabia’s King Salman issued a royal decree "pardoning all military personnel who have taken part in the Operation Restoring Hope [begun in April 2015] of their respective military and disciplinary penalties.” The sweeping and vaguely worded statement did not clarify what limitations, if any, applied to the pardon.

Houthi forces opposed to the coalition have also carried out frequent violations of the laws of war, including likely war crimes. Human Rights Watch has documented the Houthis using antipersonnel landmines, deploying child soldiers, indiscriminately shelling Yemeni cities, and torturing detainees, among other abuses. Human Rights Watch has not identified any concrete steps the Houthis have taken to investigate potentially unlawful attacks or hold anyone responsible to account.

The UN Security Council has already imposed travel bans and asset freezes on Houthi leaders and their former allies through an existing sanctions mechanism that allows the designation of individuals responsible for violations of international humanitarian law. The council has not done so with respect to the Yemeni government or coalition members despite evidence of the coalition’s responsibility for sanctionable actions. Any country can suggest names to the UN Yemen Sanctions committee, triggering immediate consideration of Security Council action. Unless the coalition ends its unlawful attacks, credibly investigates past allegedly unlawful attacks, and appropriately prosecutes those responsible, and provides civilian victims redress, the council should immediately consider imposing targeted sanctions on individuals who share the greatest responsibility for repeated coalition laws-of-war violations, notably Saudi Crown Prince Mohammed bin Salman and other senior coalition commanders.

The failure of warring states to carry out prompt, credible, and impartial war crimes investigations means that other avenues to preserve a path to justice should be considered. The UN Human Rights Council should renew and strengthen the mandate and reporting structure of the Group of Eminent Experts on Yemen, which currently reports to the Human Rights Council indirectly. The government of Yemen, which has a duty to protect all Yemenis from harm, should, as a matter of urgency, join the International Criminal Court (ICC). Judicial authorities in other countries should also investigate those suspected of committing war crimes under the principle of universal jurisdiction and in accordance with national laws. States should pursue processes for gathering criminal evidence to advance future prosecutions.

For the full report and recommendations, see Human Rights Watch.