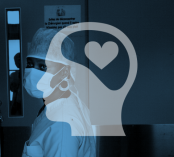 In my family there was always a strong culture of suffering in silence. We were encouraged as children to ignore small injuries and illnesses, and to soldier on without complaint.

I only realized the full extent of this embedded behavior when my elderly mother dislocated her shoulder and refused to go to the hospital for 24 hours, somehow believing that it would get better on its own.

It has always been difficult to shake off this deeply ingrained sense that to ask for help is somehow weak. When, in a one year period, my son had a serious accident, my mother had a stroke, and I was diagnosed with cancer, it took me six months to realize that I needed to find a counsellor to help me through the mental effects of that awful year.

There is a little of the stoic in many of us, and research has shown that this tendency is particularly strong in humanitarian health workers. Sometimes there is a sense that because humanitarian work may involve rescue or bringing relief, the workers are “heroes” who need no comfort themselves. Indeed, the term “health worker heroes” has been used to describe the “inspiring health workers who make health care possible”.

“From risking their lives to quell an Ebola outbreak in Guinea or to stamp out polio in Pakistan to delivering millions of healthy babies from healthy mothers,” the World Health Organization (WHO) writes, “health workers protect us, inspire us, and enable us to thrive.”

While this vision of the health worker hero does capture the undoubtable importance and value of health workers worldwide, it also conveys an idea that health workers are—or should be—invincible, able to cope with all that comes their way.

In a 2015 survey of aid workers on the Guardian-run Global Development Professionals Network, 79% of staff stated they had experienced mental health issues as a result of their job. One respondent said:

“There is a culture where asking for conditions that benefit your own personal well-being (and mental health!) means you are not a ‘true’ humanitarian.”

The burden of mental illness is underestimated in the population and sadly still carries stigma that leads to more “respectable” diagnoses of physical disorders in place of mental illness. A 2016 Lancet Psychiatry article estimated that mental illness accounts for 32.4% of years lived with disability, while previous estimates had been 21.2%—considerably lower. Stress and anxiety disorders are not serious mental illnesses in the same way as, say, bipolar disease, but they are real, can affect physical health and mental functioning as well as social interaction, and are probably underreported.

And if we cannot own up to stress and anxiety, it is little wonder that more serious mental health illness is so often hidden in communities and families.

In a recent commentary published in Global Health: Science and Practice, a small team of us explored issues of importance for the mental well-being of health professionals working in complex health emergency situations, such as with refugees or in situations of conflict.

We conclude that with the rising incidence of global complex emergencies and humanitarian crises, health professionals have become increasingly exposed to stress and trauma for protracted periods.

One week after our paper was published, the WHO announced a new, interactive database to track possible, probable, and confirmed attacks on health workers in real time. While it is commendable that those at the highest levels realize that health workers face daily risks in some of the toughest places, the ability to track the extent of violence and risk does nothing to help health workers who actually live through and with such situations.

We suggest that it is time for organizations to adopt policies and practices to support health workers during and after crisis situations and help them to manage stress.

Some organizations have policies in place similar to those identified by the Anteres Foundation, which include screening and assessment, preparation and training prior to deployment, and ongoing monitoring and support, especially during a crisis, at the end of an assignment, and post-assignment.

But according to surveys we found, only roughly half of aid organizations use such principles.

There are many proven strategies that could help humanitarian aid workers, including health workers, to cope better with the stress they experience related to their work. In our commentary we describe some of them. What seems to be missing is the willingness of organizations to give priority to mental well-being, as well as all of us being willing to ask for the help we need to remain in good mental health.

Don’t be a hero—we all need to lean on someone sometimes.