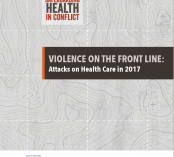 In its fifth annual report released today, the Safeguarding Health in Conflict Coalition warns that attacks on health care in conflict zones around the world are continuing with impunity and may in fact be increasing. The report entitled “Violence on the Front Lines: Attacks on Health Care in 2017” documents more than 700 separate attacks on hospitals, health workers, patients, and ambulances in 23 countries in conflict across the globe. And, as shocking as these numbers are, they are merely a fraction of the real figures: due to under-reporting of attacks and the use of aggregate data by some agencies, the true numbers are undoubtedly higher.

The report was released on the eve of the United Nations Security Council’s review of actions since it adopted resolution 2286 two years ago. The resolution condemned attacks on health facilities and health workers and demanded that governments take concrete actions toward protecting health facilities and medical workers from attack in armed conflict. But since its adoption governments have taken few of the steps needed, such as to reform military practice, investigate and prosecute those responsible for attacks, and stop arms sales to perpetrators. Without such action, the additional decimation of medical infrastructure continues to rob civilians already suffering in war of life-saving treatment.

The report documents more than 700 separate attacks on hospitals, health workers, patients and ambulances in 23 countries in conflict across the globe.

“Numbers don’t tell the full story of the violence inflicted on patients and the doctors, nurses, lab technicians, and ambulance drivers who have made it their life’s mission to provide crucial care services to people in need,” said Rubenstein. “In one incident in the Democratic Republic of Congo, a militia allied with the Congolese army attacked a hospital in the town of Cinq in the Kasai region near the Angola border, killing at least 90 medical staff and patients, including pregnant women and other civilians. During the attack, the militia set fire to the operating theater with approximately 35 patients trapped inside. Yet the world pays little attention.”

The report reveals that the ten countries which experienced the most attacks on health in 2017 are Afghanistan, the Central African Republic (CAR), The Democratic Republic of Congo (DRC), Iraq, Nigeria, the occupied Palestinian territory, Pakistan, South Sudan, Syria, and Yemen. Syria continues to experience the highest number, with 252 documented acts of violence against health facilities, transport, and personnel in 2017, amid sustained airstrikes and shelling on hospitals there.

The report defines an attack on health care as any act of verbal or physical violence, obstruction or threat of violence that interferes with the availability, access, and delivery of curative and/or preventive health services in countries experiencing conflict or in situations of severe political volatility. This includes attacks that kill patients, health workers, or others or destroy health facilities, and also includes the looting of medications and other humanitarian supplies.

In 15 countries, some 56 health programs were forced to shut down due to insecurity, leaving citizens without essential services. In Burkina Faso, where three health centers were closed following a terrorist attack, some 38,000 people were deprived of access to crucial treatment. In the occupied Palestinian territory, the Palestine Red Crescent Society reported 33 incidents where Israeli security forces restricted the passage of ambulances.

In 15 countries, some 56 health programs were forced to shut down due to insecurity, leaving citizens without essential services.

In Pakistan and Nigeria, vaccinators remained under attack, placing children under continued threat of being denied access to polio immunizations. Laura Hoemeke, Director of Advocacy and Communications at IntraHealth International, a member of the Coaliti0n said, “In Pakistan, the number of reports of vaccinators killed declined from prior years, showing that proactive steps to protect them and other frontline workers can increase the security of essential primary health services.”

Susannah Sirkin, director of international policy and partnerships at Physicians for Human Rights (PHR), a member of the Coalition, explains that these attacks do so much more than destroy buildings and kill medical personnel. “These attacks terrorize communities. They deprive already-suffering civilians of the life-saving treatment that they deserve. In many cases they are egregious violations of international humanitarian law and can destroy every possibility for communities to rebuild and restore their humanity amid the brutal backdrop of war.

“As our Coalition report outlines, the Security Council needs to formally adopt sensible recommendations towards the implementation of resolution 2286, initiate investigations of violations under international humanitarian law through commissions of inquiry, and make referrals to the International Criminal Court where the crimes reach the level of mass atrocities,” she said.

The evidence presented in the report brings together findings from coalition members providing a much more comprehensive picture of attacks on health care than previously available. The collaboration on information collection and management has been driven by Insecurity Insight. Its director, Christina Wille, explains that “information on attacks on health care is scattered across many sources in different places. A collaborative approach to collecting, analyzing and using this information is essential to understanding better the scale and nature of the problem, and devising effective responses. This report breaks new ground in bringing information providers together and demonstrating the value of collaboration.”

The Safeguarding Health in Conflict Coalition, of which IntraHealth is the communications secretariat and a member, consists of more than 35 organizations working to protect health workers and services threatened by war or civil unrest. The coalition raises awareness of global attacks on health and presses governments and United Nations agencies for greater global action to protect the security of health care.

ADDITIONAL RESOURCES:
Access the report here
See an overview of the data
Take a look at the data
Video Interviews
Social Media Toolkit