Inside The Last Refuge For Afghanistan's War Wounded 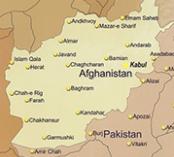 KABUL -- Burhanuddin lay still and silent in the hospital bed, his face wrapped in so much thick, white gauze that he looked more mummy than man. The 35-year-old father of four young children could barely speak when the Italian doctor asked him from where he had come.

“Kunduz,” he muttered, his swollen lips preventing him from saying any more.

A stump where his right arm used to be hung limply at his side, blown off when a rocket landed near his farm just two days earlier during fighting between Talibanand government forces. A plastic bag stapled to his medical chart held the grape-sized stones that were lodged in his upper body. With one eye now blind and the other damaged, he’s lucky to be alive.

If the rocket had landed on his farm six months ago, Burhanuddin would have been able to seek emergency treatment for free at the 92-bed Doctors Without Borders trauma hospital in Kunduz, which highly trained Afghan and international medical staff ran.

But ever since a U.S. attack in October destroyed the hospital -- the only trauma center like it in the country’s north -- Afghans like Burhanuddin now have to travel 200 miles to the Emergency Hospital in Kabul to receive life-saving treatment. The journey takes hours, sometimes days by car, much of it on a worn-out, snaking mountain route prone to avalanches and rockslides that passes through the Hindu Kush mountains.

When patients enter Emergency, medical staff ask three questions: From where are you coming? What’s the injury? How long has it been?

Often, as in the case of Burhanuddin, the answers are shocking.

It took him two days to reach here. His wounds were so dire that both a local doctor and a government-run hospital in Kunduz sent him to Emergency instead, according to his uncle.

The full article continues at http://www.huffingtonpost.com/entry/inside-the-last-refuge-for-afghanistans-war-wounded-after-us-strikes-destroyed-kunduz-hospital_us_56be364de4b0c3c550514ee4?utm_hp_ref=world