The Israelis and Palestinians who Work Together in Peace 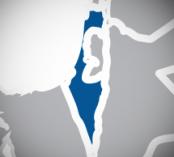 In a world of conflict, confrontation, deadlocks and dead ends, few crises are as protracted as the Israeli-Palestinian impasse.

But however inauspicious a situation, pockets of humanity can always be found.

Within minutes of arriving at the emergency wing of the Hadassah Ein Kerem hospital in Jerusalem with severe chest pain, a 58-year-old heart attack patient is lying on an operating table. A cardiologist and a team of three specialist cardiovascular nurses stand over her.

In a room behind a glass screen beyond the operating table stands the head technician, Siham Sheble Masarwa, an Israeli Arab, who monitors the operation, directing a team of Jewish and Arab medical experts.

Masarwa monitors x-ray images on a screen that show where the blockage is in the woman’s left coronary artery. She has been a nurse at the hospital for 20 years and now runs the catheterisation lab in the intensive cardiac care unit.

The Hadassah Ein Kerem hospital sits on what was an Arab village that was cleared when the Israeli army attacked it in 1948 and the Arab residents fled. Today the hospital is a rare island of calm where Jews, Israeli Arabs and some Palestinian staff work together to treat patients.

Outside, there is a sea of distrust and growing violence between Israelis and Palestinians, with divisive political rhetoric on the rise and the loudest voices pushing for nationalism and more division.

Next door to the lab is the cardiology ward, where Rashad Rizeq, 32, a Palestinian from Ramallah, has been selected for a residency.

This article continues on The Guardian website at https://www.theguardian.com/world/2016/jul/11/israel-jews-arabs-palestinians-work-together-peace?CMP=share_btn_twhttps://www.theguardian.com/world/2016/jul/11/israel-jews-arabs-palestinians-work-together-peace?CMP=share_btn_tw