"It Is Time to Act": World Health Assembly Side Event on Health and Well-Being in Emergencies 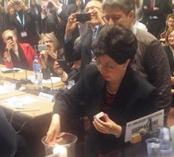 Yesterday, during the World Health Organization’s 68th World Health Assembly, the Safeguarding Health in Conflict coalition, along with United Nations agencies and nine member states, led by the Netherlands and New Zealand, held a well-attended side event on health and well-being in emergencies. The event was organized to galvanize global action and strengthen the role of the World Health Organization in coordinating the global response and responsibility to ensuring safety and security during conflicts and other emergencies.

Safeguarding Health in Conflict Coalition Chair Leonard Rubenstein described the global scope of the problem as reflected in the report the coalition released the same day and pointed a way forward, focusing on monitoring and reporting, training, and accountability.

“So much of our energy in global health is directed toward creating vibrant health systems that can serve everyone. But violence against and insecurity of health care undermines all our best efforts to achieve universal health coverage, immunize all children, assure safe childbirth, and develop the health workforce countries need,” Rubenstein said. “Some believe we are powerless to stop them. But these assaults are not inevitable. They can be prevented. Dr. Chan has spoken powerfully and passionately against them, and the WHO is incorporating advocacy for safer health care in its core work. The WHO also must fulfill the mandate of a 2011 resolution to provide leadership on data collection and dissemination regarding attacks on health care so that we can understand them and protect health care from attacks.”

Rubenstein also spoke about the responsibilities of member states in taking concrete actions to repeal laws that can make the provision of health care a criminal act. He also said that countries should train police, soldiers, and paramilitary groups in their obligations under the law, assist health workers in understanding their rights and responsibilities, assure protection from third parties, and collect data to contribute to the evidence base of attacks on health workers and facilities.

“The roadmap to protection is before us,” Rubenstein concluded. “We can work together to protect health workers and their patients from attack. It is time to act.”

Other speakers included Iraq’s Minister of Health of Iraq and the head of the Syrian Red Crescent Society, who described the devastating consequences of relentless attacks on health workers. Princess Sarah Zaid of Jordan, an outspoken advocate for maternal and child health, spoke of the specific consequences of health care-related violence on women and children. Laura Hoemeke of IntraHealth International, a member and cosecretariat of the coalition, highlighted how attacks on health workers effect the most vulnerable. "Both in countries officially 'in conflict' and around the world when random acts of violence occur, maternal and child health services suffer," said Hoemeke. "Without protecting health workers and facilities who deliver them, the world will never be able to end preventable maternal and child health deaths."