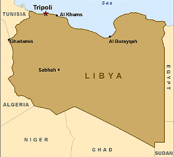 (Beirut) – Unidentified aircraft attacked a hospital compound in the city of Derna, eastern Libya, on February 7, 2016, in apparent violation of the laws of war. Two bombs struck the Al-Wahda Hospital compound in the Bab Tobruk area, killing at least two civilians, including a child, and causing extensive damage.

No warring party in Libya and no third country has claimed responsibility for airstrikes on several locations in Derna that day. Saqr el-Jerroushi, air force chief of staff for the Libyan government based in Tobruk and al-Bayda, which does not control Derna, said in an interview that the strikes were carried out by a “neighboring country” but did not give details. His government, one of two in Libya, also issued a statement denying any responsibility, while warning against the “violation of Libyan sovereignty and penetration of its airspace.”

“Libya is in such chaos that unidentified forces are conducting bombing campaigns that kill civilians while those in charge claim not to know anything,” said Hanan Salah, Libya researcher. “Bombing hospitals crosses a red line in any conflict, and demands that those responsible should be identified and held to account.”

Human Rights Watch spoke by phone on February 11 with a witness who said that two bombs landed at the Al-Wahda Hospital compound early in the morning on February 7, hitting the kidney and internal medicine sections, as well as the staff dormitory. He said the strikes killed a pharmacy staff member, Mastura Ali Mohamed al-Drissi, 40, and her young son, Mohamed Jomaa Abdelazziz al-Ghwari, 10, who were both asleep in the staff residence.

The witness, a member of the hospital administration, who said no fighters or other members of militias were present in the hospital compound, told Human Rights Watch: “It was very early in the morning, around 5 a.m., when the airstrikes started. I immediately rushed to check on the hospital and found that the kidney section had been badly damaged. Once I got to the staff residence area, I saw the damaged house of one of the families and heard the voice of a man under the rubble calling out for help and asking for his wife and child.

Together with others who were assembled at the scene, we dug under the rubble to search for them, the man was fine, but it was too late for his wife and child, they were already dead.”

The full article continues at https://www.hrw.org/news/2016/02/17/libya-derna-air-strikes-hit-hospital on the Human Rights Watch site.