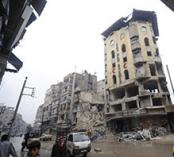 Last month, American aid worker Peter Kassig was executed in Syria by the Islamic State militant group. The 26-year-old emergency medical technician had worked in hospitals, clinics and refugee camps throughout the region for more than two years. He was known for treating anyone who needed him, regardless of political affiliation. In a country like Syria, that kind of openness is both a statement of integrity and a huge personal risk.

Kassig's death is part of an alarming trend. Although health care workers have been caught in the crossfire for decades, they're now being directly targeted. And threats are at an all-time high. Since 2012, there have been 2,300 incidents of violence or threats of violence reported to the International Federation of the Red Cross (IFRC), though the IFRC suspects that many more go unreported. This week, the United Nations passed a resolution that recognizes this danger and strengthens existing international laws that protect health care workers in conflict zones.

International humanitarian workers and local health care providers are "literally being hunted down," Bruce Eshaya-Chauvin, medical adviser to the IFRC, said in a 2013 speech in London. Medical professionals face torture, abuse and kidnapping as they offer emergency medical care to the sick and wounded, along with some semblance of primary care for chronic and treatable conditions.

"We have seen targeted bombing and killing of health workers and willful destruction of ambulances and hospitals," says Susannah Sirkin, the director for international policy at Physicians for Human Rights. "In the last few years, we have noticed an almost extreme flouting of norms and laws that exist to protect the safety of health care workers."

In Bahrain, for example, doctors who came to the aid of injured protesters during the Arab Spring of 2011 were kidnapped from their homes, detained with no promise of release and labeled terrorists. While in custody, they were tortured, beaten and threatened with rape and death.

This isn't a rare occurrence. Earlier this year, Fallujah General Hospital in Iraq was repeatedly shelled and bombed, allegedly by the government of Iraq. In Pakistan, since December 2012, 80 polio vaccinators have been killed by militant groups. In the Central African Republic, 42 percent of hospitals have been damaged by fighting and 80 percent of the country's medical workers have left their jobs.

And then there is Syria: "We have never seen anything like what we are seeing in Syria," says Leonard Rubenstein, chairman of the Safeguarding Health in Conflict coalition, an organization that works to protect health care workers in conflict zones. "They are doing everything they can to kill every health worker, to bomb every medical facility, to send snipers after health workers. There is something uniquely horrific happening there. It is on a different scale than anything we've seen before."

The full article continues at http://www.npr.org/blogs/goatsandsoda/2014/12/16/371273053/medical-workers-in-conflict-zones-have-never-faced-greater-risks on NPR’s blog.