Mistrust and Machetes Thwart Efforts to Contain Ebola in Guinea 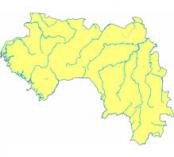 LOLA, Guinea (Thomson Reuters Foundation) - When Red Cross pickups crawl through the streets of the Guinean town of Lola in search of Ebola victims, crowds of women gather to shoo the medical workers away, young boys throw stones and angry men reach for their machetes.

In the country where West Africa's Ebola outbreak began, hostility towards aid workers - fueled by ever more far-fetched rumors - is undermining efforts to contain the deadly virus.

"People tell us if we don't leave they'll beat us up, or smash up the car," said Paquile Zoglelemou, head of the Red Cross in Lola, a town set in thick, tropical jungle in the deep southeast of Guinea near the Liberian border.

Concerns about violence directed at aid teams comes as the number of new cases of Ebola rose at the start of February in all three of West Africa's worst-hit countries - Guinea, Liberia and Sierra Leone - ending previously encouraging declines.

In Lola, a market town with houses of mud brick and tin roofs, a spate of new Ebola cases in recent weeks has stoked fear and mistrust. Despite government efforts to inform people about the virus, false rumors and conspiracy theories win out.

One rumor holds that Western governments have planted the virus, another that spraying of disinfectants is actually a means of infecting others, and even that Ebola treatment centers are used for the extraction and trafficking of human organs.

The full article continues at http://uk.reuters.com/article/2015/02/10/us-health-ebola-guinea-hostility-idUKKBN0LE1HC20150210 on the Reuters website.