MSF: Syria: “Our Bombs Are Smarter than Yours” 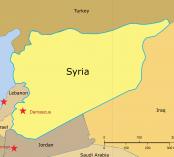 Shocking numbers of civilians are being killed and injured in Syria, with little accountability from the States involved – and in particular the United Nations Security Council, the majority of whose members are backing rival sides in the war. In the diplomatic blame-game that has developed, a new arms race has emerged. In the past, Cold War powers went out of their way to claim that ‘my bombs are more powerful than yours.’ Today, these same Cold War powers now argue over whose bombs are smarter.

The double attack on the Médecins Sans Frontières-supported hospital in Idlib Governorate, Syria on Monday killed 9 staff and 16 patients, a death toll expected to rise as the rubble is cleared. It did not take long for the states involved in the conflict to blame each other for the destruction of this hospital, which was an apparent targeted assault. Turkey was quick to blame the Syrian government and its allies, Russia denied involvement, while Syria squarely placed the blame on the US-led coalition.

The skies above Syria are congested with various air forces that support two different military coalitions – the Syrian government backed by Russia, and the US led coalition, which includes two additional UN Security Council members, UK and France. None of the parties to the conflict are willing to take responsibility for the destruction of schools, hospitals and other protected sites.  But destroyed they are, on a horrifically frequent basis. MSF-supported medical staff are equipped to diagnose medical conditions, not recognise military hardware. An independent investigative body needs to determine the facts.

Last week U.S. Secretary of State Kerry claimed that Russia was using “dumb bombs” in Syria, implying that U.S airstrikes were smarter and could not possibly have caused civilian casualties in Syria. For MSF, this is difficult to take at face-value. In October,our Kunduz Trauma Centre in Afghanistan was destroyed in a U.S. airstrike, whilst between October and January three MSF-supported health facilities in Yemen were hit, two confirmed as being attacked by Saudi-led airstrikes, operating with UK equipment and U.S. targeting advice. These attacks were all presented as ‘mistakes’, indicating either a lack of precision, or worse, a lack of respect for health structures.

In Afghanistan and Yemen there is only one military coalition in the air, and the GPS coordinates of all MSF hospitals are shared on a regular basis with all the militaries. But the situation in Syria is far more muddled. There, two coalitions compete in the sky, each claiming to minimise civilian casualties while maximising  the killing of ‘terrorists’ – with little agreement of what constitutes a ‘terrorist’ and what constitutes a  ‘moderate’. Hospitals that MSF supports in Syria are bereft of the possible protection of being clearly marked as a hospital or  sharing of GPS coordinates, as the Syrian government  passed an anti-terrorist law in 2012 that made illegal the provision of  humanitarian assistance – including medical care – to the opposition, forcing most health structures to go underground and operate without governmental medical registration. The bombing parties can then conveniently claim they were unaware it was a hospital they hit.

Last Monday’s hospital attack in Idlib is far from unique. Last week MSF released a report showing 94 attacks on health structures that MSF supports in Syria last year. Many attacks are indiscriminate aerial bombardments destroying not only hospitals, but other civilian infrastructure such as schools, mosques and market places – all grave violations of international law. In some cases, the rescue services including health responders, were seemingly deliberately targeted when responding to the consequences of an airstrike. These are known as ‘double-tap’ attacks.

The medical data from MSF-supported health facilities reveals the shocking human toll of the conflict: 155,000 war-wounded cared for across 70 hospitals, which only cover a relatively small geographic region of Syria. Between 30 and 40 percent of the war-wounded were women and children, an obvious indication that civilians and civilian areas are not protected from attack.

Unsurprisingly the number of war dead recorded in MSF supported facilities in the North of Syria drastically increased in October, when two more States – in this case Russia and France  - deployed their air forces. For the first time since 1953 in Korea, four of the five permanent members of the UN Security Council are now active in the same conflict. This same Security Council has unanimously passed motion after motion, most recently in December 2015, vowing to protect civilians in Syria. So far, there is little evidence their own militaries and their allies, whether the Syrian government or the ‘moderate’ opposition, are upholding this pledge.

Instead, each of these four nations presents its forces as terrorist-fighting humanitarians, pledging to use the same air force that drop bombs to also drop food in besieged zones in Syria. Food drops in besieged areas – with a total population estimated at nearly 2 million people – bring very little volume of aid, and cannot replace food convoys, a fact acknowledged by the US government spokesperson last week. In addition to this, people in besieged areas are primarily dying from war injuries and a lack of medical care. In practical terms, proposed food drops are little more than a public relations exercise, which only creates more confusion. For the Syrian people it is also dangerous - when hearing a jet engine, how are they to know whether the plane brings food or bombs? Or both?

For MSF, the rhetoric over whose bombs are “dumb”, and whose jets the most humanitarian, is simply disingenuous in the face of the catastrophic human toll of this constantly escalating war. Civilians are killed and hospitals are destroyed, while those trying to flee are trapped in besieged zones in Syria, or stuck at the Turkish and Jordanian borders.

All four permanent members of the UN Security Council currently participating in the conflict must respect their own resolutions and assure that their own military, as well as their military allies, start to implement the resolutions for which they unanimously voted.