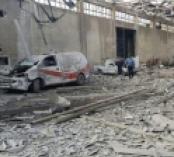 Ahead of the G20 Summit in Hamburg, where global health is on the agenda for the first time, the international medical humanitarian organisation Médecins Sans Frontières (MSF) called on G20 leaders to follow through on the declaration made by their health ministers in late May. MSF welcomed the acknowledgement by G20 health ministers in their declaration that critical health issues such as drug-resistant infections, including tuberculosis (TB), and attacks on medical facilities and personnel in armed conflict must urgently be addressed. G20 leaders now need to turn words into concrete action.

“The most powerful governments in the world must commit to urgently implementing policies that will prevent and alleviate unnecessary suffering of people all around the world,” said Florian Westphal, General Director of MSF Germany. “The G20 leaders need to improve people’s access to medical care and turn their words into action.”

MSF asks the G20 leaders to take action on the following issues:

From Yemen to Syria, and from South Sudan to Afghanistan and beyond, health facilities are being looted, burnt and bombed by state and non-state parties to conflicts, resulting in the deaths of civilians, including patients, doctors and nurses. Such attacks deprive hundreds of thousands of people of the basic health services they need.

One year since the UN Security Council adopted Resolution 2286 on the protection of the medical mission, and the Secretary General’s proposals to implement it, medical workers are still no safer.

“While the G20 Health Minister’s Declaration condemned attacks on medical personnel and facilities, these governments must demonstrate their commitment to turning UN Security Council Resolution 2286 into concrete action by immediately stopping attacks on medical facilities and allowing for the impartial delivery of health care in conflict, according to medical ethics,” said Florian Westphal. “The protection of medical facilities and personnel in conflict should be formalized in national laws, war manuals and the rules of engagement of armed forces.”

TB and drug-resistant infections: investing in research and development (R&D), and making treatments affordable for all people

From the war-wounded in Jordan, to newborns in Pakistan, to burn patients in Haiti, to people with multidrug-resistant TB in South Africa and Eastern Europe, we see drug-resistant infections across the globe—including those that can only be treated with the very last lines of antibiotics. One of the challenges with antimicrobial resistance (AMR) is the lack of new antibiotics, as for decades pharmaceutical corporations have been turning away from R&D for new antibiotics, leaving few new options in the pipeline.