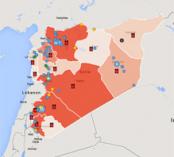 Syrian forces have systematically attacked the health care system in opposition-held areas over the past three years, resulting in the death of more than 460 health professionals and widespread destruction to hospitals and clinics, Physicians for Human Rights (PHR) said today as it launched an interactive map tracking these violations.

PHR said government forces committed 90 percent of the confirmed 150 attacks on 124 facilities between March 2011 and March 2014, which have devastated the country’s health system. The map, which will be regularly updated, is the most comprehensive resource on attacks on medical care in Syria since the civil war started. It provides 200 links, including more than 100 videos and photos.

“The systematic nature of these attacks reflects the government’s indifference to the health and life of civilians, which has created a public health crisis that will haunt Syria for years,” said Erin Gallagher, PHR’s director of emergency investigations and response. “Doctors and nurses who are committed to caring for everyone, regardless of political beliefs, are being killed while trying to save lives under grueling circumstances.”

The U.N. estimates that 245,000 people in Syria are living in besieged areas, cut off from food, water, and medical supplies. Almost a half of the public hospitals have been partially or totally destroyed, forcing people to turn to primitive field hospitals. After more than 700 days under siege, people in Homs are facing serious health consequences as the medical system collapses, with only three doctors available to provide treatment compared to an estimated 800 before the war.

“As doctors, we are often perceived to be the enemy because we treat everyone, regardless of their political views,” said a physician in Aleppo, who did not want to be identified by name for security reasons. “We take great risks to do our jobs at a time when our skills are greatly needed. War has ravaged our country’s health system, and attacking hospitals and doctors has made this horrible situation even worse.”

Attacks on medical professionals, facilities, and supplies during armed conflict violate the Geneva Conventions. When the attacks are widespread or systematic, they constitute a crime against humanity. From January through March of this year, there have already been at least 14 attacks on medical infrastructure, and 36 medical workers have reportedly been killed.

“Syria is among the worst examples of targeting medical care as a weapon of war, and we must not allow these rampant abuses to become the new norm in conflict,” said Donna McKay, PHR’s executive director. “The international community has failed civilians in Syria – tens of thousands have died and millions have been displaced. We must demand an end to these blatant human rights violations, provide access to humanitarian aid and services, and hold accountable those responsible for these crimes.”

PHR said it hopes the information provided in this map will prompt the U.N. Security Council to implement the resolution demanding increased humanitarian aid to people living in the besieged areas, including medical supplies. PHR also calls on all parties to the conflict to demilitarize hospitals and honor the international humanitarian laws that protect medical personnel and facilities.

While government forces are responsible for the majority of violations, the map indicates that attacks by anti-government forces are increasing, with 9 of the 10 attacks committed by opposition groups occurring since March 2013. PHR reiterated that the unlawful actions of one party to a conflict do not give others a license to also break the law.

The greatest number of attacks on medical facilities in Syria occurred in 2012, with at least 88 reported incidents, but the violations have continued. On February 7, 2014, for example, government forces launched a missile into a medical clinic in Aleppo, killing two patients and injuring 16 people, including eight staff. The damage from the attack forced the facility to close, leaving that area of Aleppo without a functioning hospital.

The governorates of Rif Dimashq and Aleppo have had the highest numbers of attacks on medical facilities, with 35 attacks each. Seventy-eight medical personnel have been killed in Rif Dimashq, followed by 77 in Homs.

Of the more than 460 civilian health professionals killed across Syria, at least 157 were doctors, followed by 94 nurses, 84 medics, and 45 pharmacists. Approximately 41 percent of the deaths occurred during shelling and bombings, 31 percent were the result of shootings, followed by 13 percent due to torture.

PHR collected the data from sources inside Syria as well as open sources in English and Arabic, including U.N., government, and nongovernmental reports; news articles; and social media. Given the volatile conditions inside Syria, PHR was unable to collect comprehensive data on all the attacks and killings of health care providers. PHR identified 150 attacks using multiple sources to corroborate the data; the map does not reflect other attacks that could not be confirmed at this time.

PHR has documented violations against the medical community in more than 15 countries over the last 25 years.

Note: Physicians for Human Rights has spokespersons available in English, Arabic, and French.