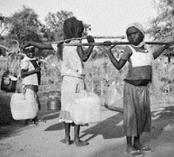 “The situation [in our village] was very bad,” said Saudia Idris, a refugee from Blue Nile state. “There was no relief. The planes were constantly bombing us and the militia were attacking us. It was no way to live,” she told Human Rights Watch. “Disease began to spread, but we couldn’t get any medication because the militia were always attacking.”

The Sudanese government’s indiscriminate aerial bombardment and shelling in Blue Nile and Southern Kordofan states has killed and injured scores of civilians since the conflict began more than a year ago, Human Rights Watch said in a report, Under Siege. The report documents the government’s indiscriminate bombing and other attacks on civilians since conflict between the government of Sudan and the rebel Sudan People’s Liberation Army-North (SPLA-N) broke out in June 2011 in Southern Kordofan following disputed state elections. The report also describes the effect of Sudan’s refusal to allow humanitarian assistance into rebel-held areas.

Inside the rebel-held areas visited by Human Rights Watch in both states, researchers found displaced civilian communities sheltering in the bush, or in the hills near boulders and caves, or in other places they had moved for safety. Everyone the Human Rights Watch researchers encountered had little or no access to clean water or basic medicines and health care.

Sudan has restricted movement into and out of rebel areas and continually denied access to independent humanitarian aid groups seeking to provide food and services, effectively blockading the rebel-held areas.

This policy has prevented civilians from accessing medicine and other supplies and personnel, such as doctors or teachers. The clinics and schools the researchers found, some of them damaged by bombing, had been closed or abandoned.

“Arbitrarily denying civilians access to food and humanitarian aid during a conflict is a brutal tactic that violates international humanitarian law,” said Daniel Bekele, Africa director at Human Rights Watch. “Those who pursue a policy of cutting people off from food, medicine, and other aid should be held responsible, including through internationally imposed targeted sanctions.”

Human Rights Watch is a member of the Safeguarding Health in Conflict coalition. The coalition promotes respect for international humanitarian and human rights laws that relate to the safety and security of health facilities, workers, ambulances and patients during periods of armed conflict or civil violence.

Photo courtesy of Human Rights Watch, © 2012 Samer Muscati/Human Rights Watch. Girls carrying water at the Doro refugee camp in Maban, Upper Nile state in South Sudan. Female refugees and humanitarian agencies say that the risk of physical and sexual assault while collecting water or firewood is one of the gravest safety and security concerns faced by female refugees. According to the UNHCR, the United Nations refugee agency, girls (under 18) are 32 percent of the entire Blue Nile refugee population registered in the four camps in Upper Nile state, South Sudan.