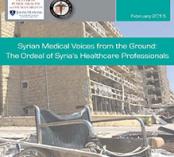 Washington, DC – “Working in a field hospital is like death,” said a Syrian general practitioner from Idlib, describing medical practice while under assault from barrel bombs and other attacks. Another doctor from Aleppo recounted, “I cannot forget the sight of amputated limbs, severed heads, and horrible cranial injuries.” These experiences are universal among Syrian health workers, as shown in the new report Syrian Medical Voices from the Ground: The Ordeal of Syria's Healthcare Professionals released by the Syrian American Medical Society (SAMS) and the Center for Public Health and Human Rights (CPHHR) at the Johns Hopkins Bloomberg School of Public Health.

This report provides a ground-level view of healthcare in opposition-controlled areas of Syria—not including Islamic State controlled areas—based on interviews with 27 medical workers in Syria. It explores the uses and consequences of violence against healthcare professionals, facilities, and patients and the efforts of the Syrian medical community to respond to the evolving crisis.

Leonard Rubenstein, Director of the Program on Human Rights, Health and Conflict at CPHHR, said, “One of the most alarming features of the Syrian conflict has been the targeting of healthcare by the Syrian government as a matter of policy.” Physicians for Human Rights reports that since the conflict began, there have been 228 attacks on medical facilities in Syria, almost 90% of which were launched by government forces, and over 604 medical personnel have been killed.

In attempting to provide ongoing care to the injured, health workers have opened makeshift field hospitals in covert locations such as homes, factories, and farms, often moving from place to place as they suffer damage or destruction. Dr. Zaher Sahloul, President of SAMS, said, “We now support local medical workers to build field hospitals underground, where they will be more secure from aerial attacks. However, many people still avoid field hospitals because they are considered so vulnerable to attack.” Ambulances as well as facilities are consistently attacked, including by missiles as they travel on roads. One interviewee reported that maternal mortality appears to be increasing because of the complex logistics of referral and dangers of travel, especially at night, to give birth.

The injuries doctors confront in Syria are particularly horrific in part because of the widespread use of barrel bombs. One interviewee reported seeing shrapnel the size of a human hand in a patient he treated for barrel bomb injuries. Another doctor witnessed a mother and daughter whose bodies had been blown apart while their hands were still clasped together.

Since so many health workers have fled the violence, those who remains must perform at levels far beyond their training. The number of daily injuries often leads to wrenching triage decisions. One surgeon reported: “If an operation is likely to take more than two hours, we have to forget it and the patient dies.” The large number of traumatic injuries, severe shortages of staff, and vulnerabilities of facilities has led to a major decrease in the availability of primary care, vaccinations, and specialized treatment.

Healthcare workers are further targeted and made vulnerable through the threat of arrest, detention, and torture. Of the 25 Syrians interviewed, six had been arrested and tortured, two of them twice. Medical care to opponents of the government was deemed a criminal offense early on in the conflict, resulting in the arrest and killing of hundreds of doctors, nurses, and health workers. When detained, one said, “They told me I was being treated worse because I was a doctor.”

The unprecedented attacks on healthcare in Syria, in direct violation of international humanitarian law, demands the world's attention. The courage of the health workers remaining inside of Syria is inspiring, but they do not seek recognition, only protection. When asked what would help them the most, almost without exception the interviewees said: “Stop the bombing.” The report calls for the international community to take action on the following:

SAMS is a steering committee member of the Safeguarding Health in Conflict Coalition, a group of over 30 organizations who share a commitment to the protection of health workers, services, and infrastructure from violence. Members include notable academic institutions, international and country-level NGOs with a strong focus on human rights and/or health, relief organizations, and professional associations. The secretariat is shared by IntraHealth International and the Center for Public Health and Human Rights at the Johns Hopkins Bloomberg School of Public Health.