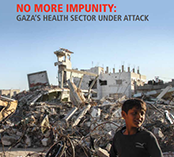 Medical Aid for Palestinians' latest report, No More Impunity: Gaza’s Health Sector Under Attack, highlights the devastating attacks on Gaza’s medical facilities and personnel, and obstruction of medical access, which occurred during the 2014 military offensive on Gaza.

Seventeen hospitals, 56 primary healthcare facilities and 45 ambulances were damaged or destroyed by Israeli strikes. Written in partnership with the Al Mezan Center for Human Rights, and Lawyers for Palestinian Human Rights (LPHR), the report provides detailed accounts of some of these incidents, including the complete destruction of Al Wafa, Gaza's only rehabilitation hospital, and an attack on the Mebarret Al Rahma Centre for People with Disabilities in which two patients were killed and three injured. Sixteen health workers, many of them ambulance drivers, were also killed while on duty treating, transporting or trying to reach the injured.

New data revealed in the report show that 511 of the 2,217 Palestinians killed last summer died without ever receiving medical assistance, due to obstruction of ambulances trying to reach the wounded or carry them to hospitals.

The article continues at http://www.map-uk.org/campaign-with-us/no-more-impunity-gazas-health-sector-under-attack--1 on the Medical Aid for Palestinian's site.