No Place to Heal 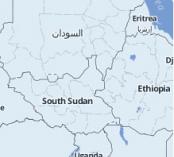 Malakal, South Sudan — Outside the pediatric wing of Malakal's teaching hospital, a human skull lies in the yellowing blades of knee-high grass. "We are finding these all the time," said a groundskeeper, who asked not to be named. "We found two yesterday," he said, shoveling the remains into a cream-colored body bag.

Malakal is a ghost town. Once South Sudan's second-biggest city with a population of 150,000, it is now home to more soldiers than civilians. Residential areas have suffered an extraordinary amount of damage since civil war broke out in December 2013, and the teaching hospital, which occupies a once-idyllic compound near a stone mosque built by Egypt in the 1940s, has been laid waste on multiple occasions. The trail of corpses now being discovered on the premises points to a disturbing trend in the country's eight-month-old rebellion: the systematic targeting of hospitals and medical personnel.

"Hospitals and clinics have been targeted to a staggering degree," said Daniel Bekele, the executive director of the Africa division of Human Rights Watch, adding that South Sudan's "entire health system" has been destroyed "because of unlawful tactics used by both sides across the conflict areas." Cosmas Chanda, the representative for the Office of the U.N. High Commissioner for Refugees in South Sudan, called the level of violence directed at hospitals and aid workers "unprecedented" in an interview in Juba, South Sudan's capital.

South Sudan's latest paroxysm of violence has exacted a devastating toll on civilians. Looting, rape, and ethnically motivated mass killings have been unleashed in a relentless pattern of attack and counterattack. The subsequent displacement of 1.5 million people, along with the inability of aid agencies to reach many of them, threatens to push the country over the brink into famine.

Since the first shots were fired in December 2013, at least 58 people have been killed on hospital grounds, while hospitals themselves have been attacked or looted on six occasions, according to the medical charity Doctors Without Borders (Médecins Sans Frontières, or MSF). Countless clinics and pharmacies have also been plundered or damaged, and medical supplies have been stolen or destroyed.