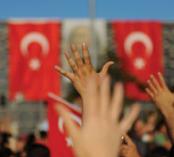 The Turkish government has engaged in unnecessary and excessive violence, used tear gas as a weapon on a massive scale, and intentionally targeted medical facilities and staff during the June demonstrations, according to a new report by Physicians for Human Rights (PHR).

The report discusses how Turkish authorities violated international laws while cracking down on what started as peaceful protests at the end of May over the government’s plan to raze Istanbul’s Gezi Park. The violent police actions led to more than 8,000 injuries due to tear gas, rubber bullets, water cannons, beatings, and live ammunition. The latest death of a demonstrator, during protests on September 10 in Antakya, has raised new concerns about more violence.

“The level and type of force used by Turkish authorities against peaceful protestors during the Gezi Park demonstrations, as well as the targeting of doctors who courageously treated them, was unnecessary and inexcusable,” said Dr. Vincent Iacopino, PHR’s senior medical advisor and the report’s co-author. “The use of all tear gas in Turkey must be banned, and government authorities must ensure these rampant abuses are never repeated.”

The report, “Contempt for freedom: State use of tear gas as a weapon and attacks on medical personnel in Turkey,” documents the unjustified use of force by police, including using tear gas as a weapon, firing rubber bullets and live ammunition at close range, and beating and detaining demonstrators. It says the Turkish government engaged in unnecessary and excessive violence against protestors that constitutes ill treatment on a massive scale.

At least five civilians died and 61 protestors were severely injured, including 11 people who lost their eyes. Based on reviews of physical and psychological evidence on 169 victims, PHR found nearly all of them were exposed to tear gas and experienced multiple symptoms, including respiratory problems, skin rashes, hearing loss, high blood pressure, and allergic reactions. Turkish security forces reportedly used 130,000 cartridges of tear gas in just 20 days following the outbreak of the protests, nearly draining the country’s entire yearly supply.

The report also details intentional attacks on the medical system, including detentions of medical personnel treating those injured by police and attacks on mobile medical infirmaries. Furthermore, a bill submitted by the Ministry of Health in July that seeks to criminalize certain provisions of emergency medical care could still be considered by the parliament when it reconvenes next month.

“Not only did Turkish authorities intentionally target emergency health centers and doctors treating the wounded, but the government is now attempting to turn emergency medical care into a crime,” said Dr. Michele Heisler, a PHR volunteer medical advisor, board member, and co-author of the report. “The Ministry of Health’s misguided bill, which would violate articles in the country’s own penal code, must be blocked, so that health workers can provide unbiased emergency medical care to those in need without fear.”

In the United States, PHR has been advocating for passage of the Medical Neutrality Protection Act of 2013, HR 2033, which aims to protect health workers globally from increasing attacks during times of war and unrest. Since 1988, PHR has documented violations on medical workers, including systematic attacks on doctors in Bahrain, jailing of doctors in Iran, and targeting of medical facilities and health workers in Syria and the former Yugoslavia.

PHR’s report on Turkey is based on interviews with 53 victims and witnesses that PHR conducted in Istanbul and Ankara from June 25 to July 2, as well as analysis of reports by several Turkish organizations, including the Turkish Medical Association (TMA) and the Human Rights Foundation of Turkey (HRFT).

Physicians for Human Rights is a steering committee member of the Safeguarding Health in Conflict Coalition.