PHR-Israel Calls for the Respect of the Right to Health 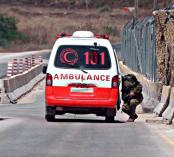 Today on Human Rights Day we remember that access to health is a human right. Furthermore, preventing health workers from providing care is a violation of international law. Unfortunately in East Jerusalem, this is a situation that they know all too well.

In recent weeks, daily disruptions by armed forces are hindering access to hospital care. These incidents are not only unlawfully putting the lives of health workers at risk but they are infringing on patients’ rights to access health care. Physicians for Human Rights-Israel (PHR-I) has documented numerous cases and are demanding for Israel to fully respect the international protection of medical staff, premises, and vehicles at all times.

Since the beginning of October, Israeli security forces have repeatedly forced their way into al-Makassed Hospital in East Jerusalem to arrest patients or confiscate medical equipment and documents. The disruptions frequently obstruct access to medical care. On October 28, 2015, Israeli security forces prevented the al-Makassed medical staff from accessing the baby post-surgery recovery room for approximately half an hour, where twenty-eight babies were hospitalized. Only four members of staff were left to tend to the babies; an insufficient number that put the patients’ lives at potential risk. The next day, the PHR-I team visiting the hospital witnessed Israeli security forces fire rubber bullets, tear gas canisters, and stun grenades towards the hospital square where medical staff were holding a peaceful protest against the recent events.

Since mid-October, Israeli checkpoints set up in East Jerusalem have continuously delayed access to medical care for both patients and staff. According to the Palestine Red Crescent Society (PRCS), it now takes between 30 and 60 minutes longer to evacuate patients from the outlying villages to hospitals. As an ambulance approaches a checkpoint, it is not allowed to pass other vehicles before receiving authorization from the unit operating the checkpoint. Security forces must then carry out a search, further prolonging the ambulance’s journey by a few more critical minutes. At peak traffic times ambulances are regularly blocked for half an hour at the checkpoint itself, delaying treatment of patients in urgent need of care.

Over the past couple of weeks PHR-I has seen an increase in the number of reports of incidents against medical teams. Information received from rescue organizations operating on the ground suggest that, between October 1st and of November 16th, over 300 incidents have taken place- 140 emergency medicals staff and volunteers were injured and 90 ambulances sustained various damages.

These incidents do not happen in a vacuum: they are part of the routine of the military occupation of the Palestinian territories, which is the source of systematic violations of Palestinian rights—including the right to safe and timely health care and the protection of health workers & medical facilities. PHR-I has already addressed the Defense Minister, the Health Minister, and the Coordinator of Government Activities in the Territories, warning them of the situation and demanding that the activity of medical teams be respected in light of the numerous incidents. It has also asked the Israeli Medical Association and Magen David Adom to react to these events.

In 1948, the United Nations General Assembly adopted the Universal Declaration of Human Rights, today, 67 years later- violations to basic human rights for both the patients and health workers still happening. PHR-I calls on the international community to urge Israeli security services to put an end to such offenses. All health care staff, medical facilities and their patients should be granted safe and unimpeded access at all times.