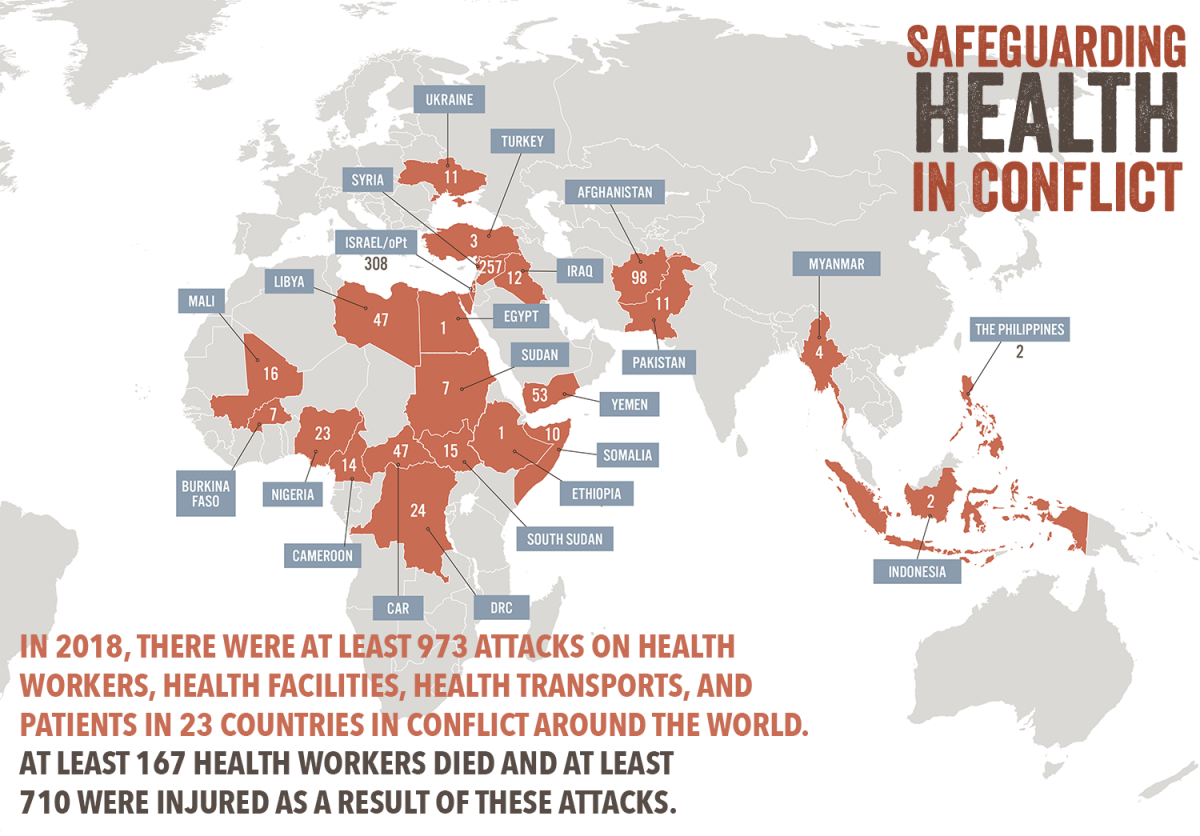 Washington, May 15, 2019 – There were at least 973 attacks on health workers, health facilities, health transports and patients in 23 countries in conflict in 2018, the Safeguarding Health in Conflict Coalition reported today. At least 167 health workers died and at least 710 were injured. This marks an increase in the number of documented attacks compared to 2017, when the coalition reported 701 such instances.

Evidence of attacks in the report, Impunity Remains: 2018 Attacks on Health Care in 23 Countries in Conflict, was gathered from humanitarian organizations, the World Health Organization and other United Nations (UN) agencies and coalition members, as well as from open source data.

“The UN and governments claim to be committed to stopping attacks and ensuring accountability,” says Leonard Rubenstein, chair of the coalition and senior scientist at Johns Hopkins Bloomberg School of Public Health and the Johns Hopkins Center for Humanitarian Health. “But we are seeing again widespread impunity by state militaries and armed groups, the targeting of health workers and the health of millions of people at risk.”

The report offers accounts of specific attacks, including:

The greatest number of attacks occurred in Afghanistan, the Central African Republic, Libya, the occupied Palestinian territory, Syria and Yemen. Airstrikes were conducted against hospitals in Syria and Yemen. Vaccinators were attacked in Afghanistan, the CAR, the DRC, Pakistan, Somalia and Sudan. Eighty-eight health workers were killed in Syria. More than 500 health workers were injured in the occupied Palestinian territory. Armed men entered a health facility in the DRC, looted and beat patients, and attacked and raped a nurse.

“Attacks on health facilities and health workers not only cause immediate damage and loss of life but also impede access to essential health services for vulnerable people around the world, jeopardizing universal health coverage and global health security,” says Carol Bales, advocacy and policy communications manager at IntraHealth International, who oversaw the report’s production. “We need to do more to ensure health workers are safe and able to improve and save lives.”

“Attacks on health care workers and facilities are egregious violations of international humanitarian law and they are war crimes, sometimes rising to the level of crimes against humanity,” says Susannah Sirkin, director of policy at Physicians for Human Rights. “In the three years since the UN passed Resolution 2286 to protect health in conflict, attacks on health facilities and health personnel have continued with utter impunity. It’s high time for the international community to demand accountability for these heinous crimes.”

To better document the number and impact of these attacks and stimulate compliance, the WHO launched its Surveillance System for Attacks on Health Care in January 2018. And the NGO Geneva Call issued a Deed of Commitment to encourage nonstate armed groups to protect and respect health care in conflict and to agree to performance monitoring.

“More than 900 documented attacks on health care is particularly alarming because it does not cover the full extent of the problem,” says Christina Wille, director of Insecurity Insight, which led data collection for the report. “Underreporting means that the number of attacks in 2018 is likely much higher than the report reflects. Each attack has consequences for the delivery of health care and the number of attacks does not quantify the impact of death and destruction on the broader health outcomes for affected communities.”

The new Safeguarding Health in Conflict report calls on states in conflict, through their ministries of defense, interior and health, to do more to protect health workers, end impunity and ensure that access to health care is available to all. Its recommendations include:

The Safeguarding Health in Conflict Coalition, of which IntraHealth International is the secretariat and a member, consists of 40 organizations working to protect health workers and services threatened by war or civil unrest. The coalition presses governments and United Nations agencies for greater global action to protect the security of health care. 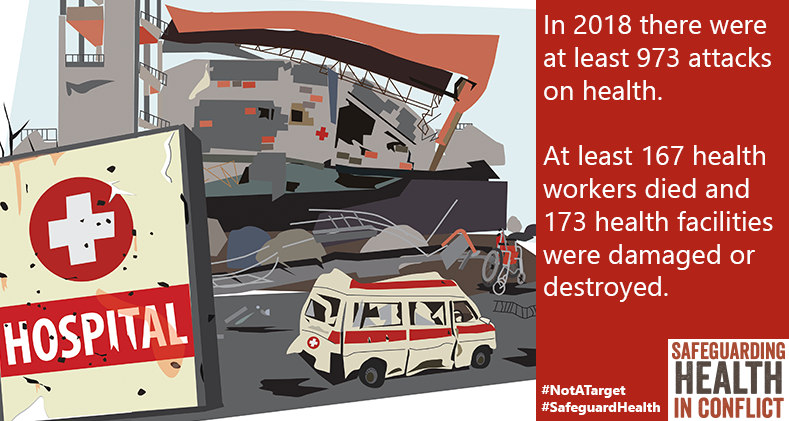