Remarks by Dr. Nils Daulaire at the Congressional Briefing on Medical Neutrality, March 7, 2012 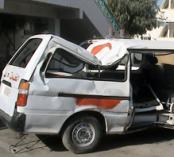 Good Afternoon. Thank you so much Congressman McDermott for bringing the three of us here this afternoon to discuss the necessity of keeping health care workers safe while they work in dangerous situations.

This is an issue which is extremely important to the Obama Administration. It is being addressed in various ways by a number of departments, and I would like to give you a short update how we, the US government are engaging on this issue overseas.

And of course, as part of this I will talk about my own Agency’s work. I am pleased that as the Director of the Office of Global Affairs, at the Department of Health and Human Services and as the US Representative to the Executive Board of the World Health Organization, I have been able to advance this important human rights issue at the WHO.

[Importance of this issue to the USG]

The United States knows that stopping assaults on health workers and health facilities is critical – both as a human rights issue and a health systems issue. We invest heavily in health worker education and have worked very hard on health worker retention and recruitment, toward supporting health systems development and increasing equity of access to essential health services. Health care workers are the building blocks any health system and nothing is more undermining of these efforts than threatening the lives or welfare of the health workers themselves and the security of the facilities they work in.

The United States also recognizes the gravity of attacks on health workers and the facilities in which they work. Health workers have been murdered, wounded, kidnapped, arrested, prosecuted, and obstructed in their ability to reach people in need. Some flee because of legitimate fear that they may be targeted or caught up in violence inflicted on health facilities. We support efforts to protect health workers and health facilities from violence or the threat of violence in carrying out their health care duties.

We also encourage all States and non-state actors to abide by applicable international laws requiring that health workers be permitted to provide health services to those in need without interference. This past July the US government supported UN resolution 1998 at the UN Security Council that expanded the accountability mechanisms under the UN scheme for protecting children in armed conflict to include attacks on schools and hospitals.

However, while the US government is very engaged on this, we are only one actor in an issue that requires a comprehensive and multifaceted approach. The work of organizations, scholars and activists, such as Len and Rick, are a critical and necessary piece to raising the awareness of the devastating impact of assaulting health workers and facilities. They have done an amazing amount of work to nudge and sometimes encourage policymakers and governments to prioritize this issue. Thank you.

Before I talk about my own involvement, I would like to highlight key work being done on this issue by the US Department of State and Department of Defense.

As many of you know, each year the State Department publishes Country Reports on Human Rights practices. These now cover the human rights situation in 190 countries. These reports, compiled by foreign service officers in embassies and edited in Washington, are respected sources of human rights information and are used by and cited by foreign governments, international bodies, and nongovernmental organizations around the world.

A handful of these have reported on attacks on health workers and facilities, but this has largely been on an ad hoc basis. This is because the instructions did not ask embassies to inquire about these violations, and thus information was added only when it brought to, rather than sought out by, the State Department.

This past year, with the urging of groups such as Len’s, Asst. Secretary of State for Democracy, Human Rights and Labor Michael Posner proposed, and the State Department approved, adding questions on attacks on health workers, facilities, and ambulances, as well as obstruction of humanitarian access. As a result, future reports will cover these issues more extensively and contribute to the evidence base.

The Department of State also engaged on this issue internationally. At the most recent quadrennial conference of red cross/red crescent societies, the US delegation, in which my office participated, highlighted the issue of "health care in danger." This explicit support from our government proved critical in enabling the ICRC to pass a resolution in which they agreed, among other things, participate in data collection schemes. This was an important contributor to building international recognition and support of the issues ahead of other ongoing global fora, such as at the World Health Organization.

The Department of Defense is also engaged on this issue. As background, last summer, the International Committee of the Red Cross launched a Health Care in Danger campaign, designed to increase attention to attacks on health care in armed conflict and other situations of violence. As part of its campaign, ICRC will hold a series of workshops globally to address practical means by which protection of health care in these situations can be improved.

The Department of Defense has agreed to host a workshop, which will take place in late October or early November, on military practice. This workshop with involve militaries from all over the world, addressing detailed questions about protocols for complying with international humanitarian law on respecting health and means of improving them. (The initiative is under the direction of William Lietzau, Deputy Assistant Secretary of Defense for Rules of Law and Detainee Affairs.)

And finally, let me address my own involvement. As the US Representative to the WHO’s Executive Board, I recognize that the World Health Organization is uniquely positioned to make a major contribution to understanding the nature and extent of attacks and provide the basis for action.

This past January, at the WHO Executive Board meeting in Geneva, the US Government, in conjunction with Finland, led efforts to ensure that language about the importance of health worker safety in armed conflicts was part of one of the key resolutions. I am pleased to tell you that we were successful and that this language will be voted on for formal adoption in May at the World Health Assembly.

The resolution is two part. First, it urges the protection of medical missions during armed conflict, and the safety and security of humanitarian personnel and UN personnel. And second, it calls upon WHO to help develop methods for collecting and disseminating data on this topic, in coordination with relevant UN bodies, the International Committee of the Red Cross, and intergovernmental and nongovernmental organizations.

While there is ample anecdotal data that these attacks are occurring, we do not have a method for systematically tracking the extent of the problem.

As with any health systems issue, good data and good research are the foundation for a solution. If you can’t count it, you can’t correct it. WHO is in the best position to ensure that a meaningful and practical research agenda is set and that data on interference with health services are collected systematically, efficiently and consistent with quality standards. This will provide a sound foundation for building an evidence base for prevention.

Going forward, the resolution will be considered by the 194 Member States at the 65th World Health Assembly in May. The US government is committed to getting the resolution through and assuring that it is implemented.

Protecting health workers in providing their critical services is a serious human rights issue to which the US government is unquestionably dedicated to addressing. As you can see we are working on this from a number of angles. And likewise, addressing it will require the international community to have a multi-pronged approach. After May we expect this will include the World Health Organization.

I want to ensure I leave time for my friends to speak about their work, and for questions. But I want to again thank you, Congressman McDermott, for bringing us here today.