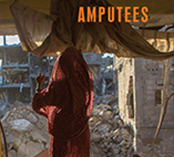 A new report by Physicians for Human Rights - Israel (PHRI), a member of the Safeguarding Health in Conflict Coalition, analyzes the deteriorated state of the health system in Gaza through the lens of Palestinians who were injured during the recent war and, as a result, underwent amputation.

According to the report, Amputees, the Israeli summer 2014 offensive on Gaza produced approximately one hundred people who lost limbs and other body parts. Their challenges—and of all those injured—did not end with the war. PHRI reviews the limited care and rehabilitation possibilities available to them in Gaza, and the obstacles facing the amputees who try to receive care outside Gaza.

When voices within Israel call for the renewal of hostilities, this report is a reminder of how the impact of war lasts far beyond its formal duration.

As is summarized in the coalition’s 2015 report, there is credible evidence that Israeli forces unlawfully targeted hospitals, clinics, ambulances, and health workers during the Israeli offensive. Seventeen hospitals and 56 primary health care centers were damaged; 16 health workers were killed and 83 health workers, most of whom were ambulance drivers, were injured.

Amputees includes stories from PHRI’s blog that follows men and women in Gaza who continue to cope with amputation and need corrective surgery before they can even be fitted with prosthesis. It shows how they—like other Palestinians in Gaza who require medical attention—continue to receive deficient treatment within Gaza largely as a result of Israel's siege and its violation of international law to allow access to health care.

The current difficulties faced by the people who have undergone amputation are a result of various factors at different stages of the medical process. As detailed in the report, these include:

With respect to Gaza, PHRI calls on the international community to pressure Israel to:

End the siege on Gaza and thereby allow the exercise of the right to health as defined by international law, and lift the restrictions and obstacles it creates for all Palestinians requiring medical treatment—specifically amputees.