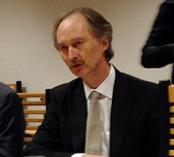 Diplomatic, global health, and humanitarian communities gather in New York to discuss United Nations General Assembly leadership for protecting access to health care
Attacks on health facilities, health workers, and patients compromise the ability to deliver care to populations in great need and to reconstruct health systems after conflict. On November 5, the Permanent Missions of Norway and Senegal and the Safeguarding Health in Conflict Coalition hosted a side event in New York during the 69th session of the UN General Assembly to discuss the roles of the international community in addressing the impact of insecurity on health services.
Permanent Representative Geir O. Pedersen of Norway welcomed over 30 participants, including representatives from the Permanent Missions of Australia, Belgium, Canada, France, Germany, New Zealand, South Africa, Spain, Switzerland, Thailand, and the US. Health workers in conflicts and emergencies are heroes, he said, and should be supported. The UN Global Health and Foreign Policy Group—consisting of Norway (chair this year), Brazil, France, Indonesia, Senegal, South Africa, and Thailand—is proposing a resolution to the UN General Assembly focused on ensuring the safety of health workers in conflict and emergency situations, such as in the current Ebola outbreak.
Dr. Margaret Mungherera, immediate past president of the World Medical Association, recalled her experience as a medical student in Uganda under Idi Amin. “You’d walk to medical school and find that lecturers had been targeted and killed by the government,” she said. “A huge gun was facing the hospital. You had to hide your clinical coat when you went outside so you wouldn’t be identified.” This insecurity contributed to a major flight of doctors; only one-third of her graduating class stayed in the country.
Dr. Mungherera pointed to the long-lasting impact of violence on health systems. “We know that in countries with conflict, it has created a huge burden of disease due to weakened health systems. This is clearly shown by Ebola—countries are not able to cope.” Eighty percent of Liberia’s health system was destroyed in the civil war, and many health workers fled. “We health workers need help from the UN,” she said. “We can also be partners and take part in the reporting.”
Leonard Rubenstein, chair of the Safeguarding Health in Conflict Coalition, noted that under-reporting of violence against health care is rampant. Over the last few years, various UN agencies have started to pay attention to this issue. “We are starting to get the momentum and mechanisms we need to tackle the problem,” he said, “and the UN General Assembly can reinforce these norms and have a big impact. This resolution can be a milestone for the UNGA to articulate values to protect health at all times.”
Related:
Photo: Permanent Representative Geir O. Pedersen, Permanent Mission of Norway to the United Nations
Share to: