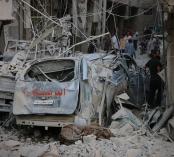 Today the Safeguarding Health in Conflict Coalition welcomes passage of a resolution by the UN Security Council condemning attacks on health workers and facilities and setting a course to secure compliance with international law and end impunity. But, it said, the value of the resolution will be determined by whether states adhere to international norms, develop strategies to prevent attacks, and bring perpetrators of attacks to justice.

The Safeguarding Health in Conflict Coalition consists of more that 30 civil society, health provider, and human rights organizations that promote the security of health workers and services threatened by war or civil unrest. It monitors attacks on and threats to civilian health, strengthens universal norms of respect for the right to health, demands accountability for perpetrators, and empowers providers and civil society groups to be champions for their right to health.

“The brutal attack on a hospital in Aleppo that killed more than 50 people last week underscores the urgency of Security Council action,” said Leonard S. Rubenstein, chair of the coalition. “That attack was only the most recent in a relentless series of assaults on hospitals and health facilities affecting at least 19 countries in the last year.”

According to the coalition, in 2015 alone, hospitals in five countries were subjected to aerial bombing and dozens of people in teams vaccinating children were killed or abducted in four countries. In Yemen, after a year of war, 600 health facilities are no longer functional because of damage from attack or lack of staff, supplies, or electricity. In Syria, 2015 saw the highest number of attacks on hospitals since the conflict began.

The resolution recognizes and reaffirms the provisions of international human rights and humanitarian law guaranteeing protection of people engaged in medical activities and reaffirms that health workers should never be punished for following their ethical obligations to provide care.

The resolution urges States to take steps to prevent attacks on health facilities and health workers, reform their domestic laws to strengthen protection, train their militaries and security forces in the requirements of international law, collect data on attacks, investigate violations that take place, and hold perpetrators accountable.

The coalition stressed that States must act decisively to respect human rights and international humanitarian law and to carry out steps toward prevention of attacks, and to also report actions they take so the global health community can be assured of protection. Among these actions, the coalition said, States should repeal laws that criminalize health care to individuals deemed to be an enemy or terrorist.

State-initiated prosecutions as well as international justice mechanisms must be invoked for those who commit acts of violence against health workers and facilities. “The Security Council’s call for an end to impunity is critical, but will be judged by its actions in the face of atrocities so regularly committed,” said Donna McKay, executive director of Physicians for Human Rights, a coalition member. “That includes referrals of appropriate cases to the International Criminal Court for full investigation and prosecution.”

The resolution also calls upon the UN Secretary General, as part of his reporting on the protection of civilians, to brief the Security Council on attacks on health workers and facilities and obstruction of the passage of aid, including recording specific acts of violence against health services, remedial actions taken, and acts toward accountability. It also requests the Secretary General to make recommendations on measures to prevent attacks, to enhance protection, and to secure accountability.

To carry out these requirements, the coalition urged the Secretary General to establish a comprehensive system for regular investigation and reporting of acts of violence against health facilities and personnel and remedial actions and accountability measures taken. The coalition also called upon the World Health Organization to complement the Secretary General’s reporting with a global process for systematic collection of data on attacks on health care to increase understanding and stimulate action based on pilot work it has done.