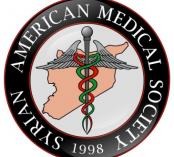 Yesterday morning, the Syrian American Medical Society's medical coordinator in Idlib, Dr. Mohamed Tennari, and president, Dr. Zaher Sahloul, gave their first-hand and expert accounts of the recent Idlib chemical agent attacks in front of the UN Security Council at an Arria-formula meeting. They spoke alongside Qusai Zakarya, a human rights activist and survivor of the 2013 chemical weapons attack on Moadamiya. The Arria-formula meeting was hosted by U.S. Ambassador to the UN Samantha Power.

Dr. Mohamed Tennari is a doctor currently working as the Syrian American Medical Society's medical coordinator in Idlib governorate. A radiologist by training, Dr. Tennari has been working in general emergency medicine to help meet local needs during the conflict and established the field hospital in Sarmin. He addressed five chemical attacks in the Sarmin and Binnish areas of Idlib that occurred between March 16 - 31, including the attack on March 16 in Sarmin that killed a family of six and caused over 120 to seek medical treatment for chemical exposure. About the chemical attack on March 16, Dr. Tennari said, "I heard the helicopters overhead at about 8:30 at night, and an announcement blared through my walkie talkie and through mosque speakers of Sarmin that there were explosive barrel bombs that had been dropped. They said that it was a chemical attack. Voices shouted for people to take care, to avoid the areas in the Qaminas village where explosions had been, and to go to higher ground for safety. I rushed to the hospital and could smell a bleach-like smell as soon as I left my house. About 15 minutes later, patients started to arrive." He was one of the many doctors and civil defenders who also suffered effects from chemical weapons exposure after treating victims from the incident.

Dr. Zaher Sahloul elaborated on the effects of the chemical attacks, saying, "Barrel bombs filled with choking agents have not been as deadly as those filled with shrapnel and explosives, but they cause a special kind of fear, panic, and confusion. Fifty percent of Sarmin's population have deserted it after the first toxic bomb even though that the area had near daily attacks with "conventional" barrel bombs."