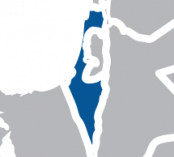 Born two months premature, baby Maryam was clearly very small for her age. When Medical Aid for Palestinians’ (MAP) team met her on a visit to al Mekassed Hospital in East Jerusalem last month, she lay in a tiny cot covered in blankets, one of four babies in a room in the hospital‘s large neonatal intensive care ward.

Ever since she was born in the hospital Maryam has required constant medical care. She needs help breathing, which she currently does with the assistance of an oxygen tube attached to her mouth.

Maryam was in the hospital alone. She had no mother there to hold her in her arms to comfort her, no father to dote at the end of the bed. She was not even visited by grandparents, aunts, uncles or cousins. Her only carers are the team of doctors and nurses who run the hospital’s neonatal care ward, and a woman from East Jerusalem who visited occasionally.

Maryam was not abandoned by choice or accident. Her family were just 50 miles away, but were prevented from visiting.

Maryam’s mother, Joumana, is from Gaza. When complications with her pregnancy developed, and with limited medical care available in Gaza due to decades of occupation, attacks on its health infrastructure and 10-year blockade, she was referred for care at the relatively well-equipped al Mekassed hospital in East Jerusalem. She received a permit from the Israeli authorities to travel, and on 1 August and only 29 weeks pregnant she gave birth to twins. Her son was stillborn and Maryam weighed just 745g.

Maryam’s mother returned home to Gaza on 5 August to be with her husband and two older daughters, believing she would be able to travel again to East Jerusalem soon. But after applying to the Israeli authorities for a permit to travel on 9 October, the family only received a response of “under review”.

Although Maryam’s physical health became less critical thanks to the care she received from the al Mekassed staff, it was six months from her return to Gaza until Joumana was able to visit her daughter again.

Sadly this story is not unique. The Government of Israel controls the movement of Palestinians between the three areas of the occupied Palestinian territory (oPt): the West Bank, East Jerusalem, and Gaza. Any Palestinian who does not have an Israeli-issued Jerusalem ID must apply for a permit to  access hospitals in East Jerusalem where many specialties – including neonatal intensive care – are located.

For Palestinians in Gaza, these restrictions are particularly onerous. According to data collected by MAP and Physicians for Human Rights – Israel (PHRI) for our recent joint briefing, Health Under Occupation: Access to Healthcare, more than a third of all patients applying to leave Gaza for treatment elsewhere in the oPt or abroad last year were denied or did not receive an answer in time for their appointment. This dropped to a record low in December, when only 42 percent of permits were granted on time.

These restrictions also apply to patients’ companions and carers, with those younger than 55 years old more likely to be refused.

When patients and their families are able to visit East Jerusalem‘s hospitals, they must also cover their accommodation and travel costs; expenses which are prohibitive for many, especially those from Gaza, where the unemployment rate is 43 percent and 80 percent rely on some form of humanitarian aid.

After meeting Maryam and speaking to doctors at al Mekassed in January, MAP and PHRI began researching the case. Last Sunday, Maryam’s story was picked up by Israel’s Channel 10 news, and shortly afterwards Joumana learnt that her permit had been granted.

On Monday afternoon, she was able to hold her daughter for the first time in half a year. Speaking to journalists, she said: "It's a very beautiful feeling. Finally I can take her in my arms.”

“Now I just hope that she'll be happy forever, and in good health forever."

Maryam is now back with her mother, and when she is well enough they will return to Gaza together.

But staff at al Mekassed told us that hers is not an isolated case. They say that each month between one and three children from Gaza, including new-born babies like Maryam, are hospitalised there away from their parents due to the Israeli permit regime.

The separation of children from their mothers can obviously be a source of unnecessary distress for both. In some cases under-stimulation and sensory deprivation may result and this can severely impact the child’s psychological and emotional development and even their future physical health. Separation also delays and threatens the vital bonding between a child and parents, which in turn increases the risk of mental health problems for the mother in particular.

The restrictions that the Israeli Government places on the movement of patients and families from Gaza violate Palestinians’ rights to health and dignity.

They are a symptom of Israel’s 50-year-long occupation of Palestinian territory, and its decade-long blockade of Gaza which the UN Secretary General has called “collective punishment”.

Maryam and her family should not be forced to endure such a situation but until these protracted injustices are finally ended many more undoubtedly will.

Amid half a century of man-made crisis and waning international attention, the situation in the oPt this year is perhaps as bleak as ever. In spite of and because of these challenges, Palestinians continue to demand their rights to health and dignity, and UK support for this call is vital.

Please help us call for an end to the permit regime which separates babies like Maryam from their parents. Email your MP using the tool found on this page: https://www.map.org.uk/news/archive/post/607-six-months-alone-how-israelas-blockade-kept-a-gaza-mother-and-her-new-born-daughter-apart#.WLBZppFZZZY.twitter