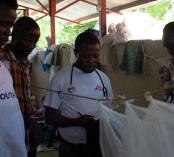 Juba, South Sudan – Civilian populations in Leer and Mayendit Counties have once again been deprived of access to urgently needed medical and humanitarian assistance after a Médecins Sans Frontières (MSF) compound in Leer was looted twice by well-organized armed men on 2 and 3 October.

As a result, MSF was forced to suspend medical activities and evacuate its team from Leer.

“MSF strongly condemns these armed robberies of its medical personnel and facilities,” says MSF Emergency Manager Tara Newell. “These incidents have forced MSF to suspend its medical activities in Leer and they are responsible for depriving the population of urgently needed medical assistance.”

On Friday, 2 October, amid renewed clashes, MSF was looted by well-organized armed men who entered its compound with their weapons, intimidated MSF staff with threat of violence and stole medical supplies, vehicles, technical equipment and personal belongings. MSF remained in Leer to continue providing medical assistance to war-wounded patients who were receiving treatment at the time of the incident.

The MSF compound and personnel were then looted a second time by the same well-organized armed group on Saturday, 3 October, rendering it impossible for MSF to continue its medical activities. As a result, MSF has been forced to temporarily suspend its operations in Leer and evacuate its team. MSF staff were not injured during the incidents and were able to provide treatment to five war-wounded patients before evacuating.

“MSF’s medical activities in Leer have been a vital lifeline to vulnerable populations suffering from malaria, malnutrition and other illnesses,” says Newell. “Following these unacceptable incidents, there is no medical actor left on the ground in Leer to provide life-saving medical care.”

Access to humanitarian assistance in southern Unity State has been severely limited since May, when an upsurge in fighting and violence against civilians forced hundreds of thousands of people from their homes and humanitarian actors to evacuate. In July, MSF was the only medical organization able to resume activities in Leer with a small medical team, which has also been providing mobile clinics for displaced populations in Leer and northern Mayendit counties. This is the third time MSF has been forced to suspend medical activities in Leer since conflict began in South Sudan in December 2013.

MSF is deeply concerned for the health of vulnerable populations in Leer and denounces the targeting of its medical operations.  MSF demands an explanation from those responsible for these unacceptable incidents and for the return of its humanitarian supplies and equipment. MSF remains committed to providing urgently needed, neutral medical assistance in Leer but cannot resume its operations until these incidents are addressed by the appropriate authorities. MSF calls for all armed actors to respect international humanitarian law, which protects medical facilities and staff.