In South Sudan, War, Disease, and a Diminished Health Workforce 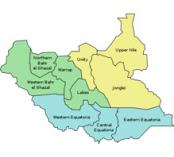 Months of violence in South Sudan have led to cholera outbreaks, food shortages, and innumerable orphaned children. This dispatch from IntraHealth’s in-country team describes the state of health care in the midst of war.

After six months of ethnic violence and political instability, South Sudan is suffering from food shortages, cholera outbreaks, and a greatly diminished health workforce. And while fighting in some parts of the country makes work difficult, IntraHealth International’s efforts in South Sudan continue.

Since 2005, IntraHealth staff in South Sudan have worked to address HIV in the country’s military and in local communities. Members of the military face a particularly high risk of contracting HIV.

“Even in this difficult situation, there are many sex workers among the soldiers,” says Alfred Okiria, IntraHealth’s project director in South Sudan. “The risk of HIV transmission is something we worry about a lot. The war has very much affected our HIV programs.”

The violence has resulted in thousands of deaths in South Sudan and over one million people have been displaced. This comes just eight years after the end of Sudan’s civil war, which resulted in the newly autonomous South Sudan.

Refugees had slowly begun to return home and reestablish their lives after the civil war. But now many have once again fled to Uganda and other neighboring countries, leaving behind empty cities and withering farms.

Many of IntraHealth’s staff members were temporarily evacuated from the country, as well. Some remained during the worst of the conflict, and others have since returned.

Accounts of how the fighting began in December 2013 vary. The government of South Sudan says it happened when soldiers loyal to former vice president Riek Machar—a member of the Nuer ethnic group—attempted to overthrow President Salva Kier—a member of the Dinka ethnic group. Others claim that Kier’s security forces first attempted to disarm the security forces loyal to Machar, igniting a conflict that quickly escalated.

Since December, as the New York Times reports, the war has intensified, and not only among soldiers. Fighters have attacked civilians of opposing ethnic groups, killing many in the streets and even in their hospital beds.

In February, at least 14 people were shot and killed in their hospital beds in Malakal, an Upper Nile State city over which both ethnic groups have struggled to claim control. Health facilities there were looted and burned to the ground.

“Most of these killings are a result of revenge,” says IntraHealth’s Patrick Buruga, a technical manager on the project. “Many state capitals have changed hands several times—sometimes the government takes over and sometimes the rebels take over. As a result, when another group comes in, they tend to want revenge. They kill whoever they can get within the state capital.”

The government has now imposed a nationwide curfew, stipulating that everyone must be off the streets between the hours of 11:00 p.m. and 6:00 a.m.

“For our IntraHealth staff, we gave ourselves a curfew of 8:00 p.m.,” says Anne Kinuthia, IntraHealth’s country director in South Sudan—just to be on the safe side.

Cholera has become a major concern in South Sudan.

“It started in Juba, but it has spread to other parts of the country,” Kinuthia says. “And of course, after what happened in December, most of the health workers have not resumed work and are still evacuated in neighboring countries. But international agencies have set up cholera treatment camps all over.”

Another, potentially longer-lasting concern is the food shortage.

Many in South Sudan have abandoned their farms, and much of the population must now rely on international aid for food. It could take years for food production within the country to recover.

“We're talking about four million people who are facing starvation,” Kinuthia says. “And now it is the rainy season, so even getting access to aid these people is very, very difficult.”

The violence has been most concentrated in three of South Sudan’s 10 states: Unity, Upper Nile, and Jonglei. IntraHealth’s South Sudan office is situated in Central Equatoria, a southern state that includes the capital city of Juba.

“In Jonglei, very, very horrible things were done, especially to women,” says Kennedy Maring, IntraHealth’s monitoring and evaluation officer in South Sudan. “Women were raped and killed and then just put out on the doorway. And one implication is that there are now a huge number of orphans. The health system in South Sudan was troubled even before the crisis. And now, it's going to really take some time for the country to recover.”

“For example, the financing mechanisms,” Okiria says. “The fighting is affecting the resource envelope, which means less revenue is coming in. And much of the money is going to finance the war. So right now we are not actually strengthening the existing health system. It's more of trying to see how we can prevent these outbreaks, and make sure there is water, and care for the people that are in camps. All these things are really going to affect our health care system.”

Maring agrees. “We only hope that the war will end as soon as possible so we can restart the whole process of rebuilding a nation,” he says. “But it's going to take some time.”

IntraHealth’s work in South Sudan is funded by the US Centers for Disease Control and Prevention.