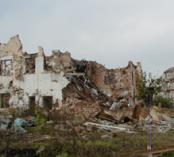 Thank you, Congressman McDermott. My name is Leonard Rubenstein. I appreciate the opportunity to share my thoughts based on work in this field for more than 15 years.

Over the past quarter century, the protection of civilians in war and civil conflict has been high on the international agenda. New domestic and international mechanisms to protect children in armed conflict from conscription as soldiers, to prevent the scourge of sexual violence, and to hold perpetrators of brutality criminally accountable have been established. Though these instruments can’t succeed in ending all atrocities, as we see to our horror in Syria, their role in deterrence and accountability is indisputable.

And yet there is a major piece missing. Despite the requirements of the Geneva Conventions, during conflicts hospitals, clinics, and ambulances are shelled, invaded, and looted. Patients are obstructed from access to care at checkpoints and arrested within hospitals. And I have spoken to dozens of doctors who were arrested and prosecuted, and sometimes tortured, for the act of practicing ethical medicine: adhering to their duty, protected under international law, to provide care impartially regardless of the political affiliation of the patient. These practices have taken place in such diverse locations as Chechnya, Nepal, Colombia, Iraq, and most recently Syria, Libya, and Bahrain.

Sometimes these assaults on health care become news, as it is now the case in Syria. But except for the warranted attention paid to attacks on professional aid workers, they have largely been off the global health, civilian protection and human rights screens. I am confident that few people know about attacks on and kidnapping of Burmese health workers in areas of ethnic conflict that have been going on for years, most recently in December. It was only in the past year that any multi-country and multi-year review was conducted. That study, by the International Committee of the Red Cross, looked at violence inflicted on health care in 16 countries over two and a half years. It found 655 discrete incidents of violence or threats of violence against health care services, leading to the deaths or wounding of more than 1,800 people.

The longer term impacts of these attacks – on access to care, on health worker migration, on population health – are still not known. But it doesn’t take much of an imagination to grasp their broader impacts. How many women die because a hospital is too damaged to provide emergency obstetric services or the staff has fled? How many children succumb to disease because insecurity precluded visits from vaccinators? Even without hard date, we can embrace the ICRC’s conclusion that “in terms of number of people affected, violence, both real and threatened, against health-care workers, facilities and beneficiaries is one of the biggest, most complex, and yet most under-recognized humanitarian issues today.”

So we need to replace periodic spasms of attention from dramatic headlines with a strategy that tales a systematic and comprehensive approach. In my judgment, that strategy has three elements: documentation, prevention and accountability. The good news is that in the past year, in part because of your work, Congressman McDermott, we have made some progress in each area.

The first requirement is systematic documentation. That sounds mundane, but it is the foundation of all civilian and human rights protection. We need to know who is perpetrating abuses, what the targets and methods are, and what impacts they have. With documentation we can understand trends and patterns and also learn whether prevention measures are succeeding. With evidence, we can also achieve a better understanding of the motives and triggers of attacks. That is why the leadership of Dr. Daulaire and the Obama Administration to mandate the World Health Organization to spearhead systematic collection and dissemination of documentation of attacks on health care is so important and worthy of Congress’ support. In January, the Executive Board of the World Health Organization adopted a U.S.-sponsored resolution that, if endorsed in May by the World Health Assembly, will create this responsibility. WHO is already looking at means to implement such a mandate. I was at a meeting in Geneva earlier this week as WHO began exploring the technical means to accomplish this objective, and was pleased to see the cooperation it is receiving from half a dozen other UN agencies.

Our State Department is also contributing to the evidence base, taking one of the actions called for in Congressman McDermott’s bill: soliciting and reporting information on attacks on health care and humanitarian access as part its annual Country Reports on Human Rights Practices.

The second element is prevention. We know it is possible. As Congressman McDermott witnessed in El Salvador 30 years ago, health care can be protected even in the midst of nasty wars. Intermediaries there helped negotiate a three-day cease fire to allow vaccinations of children. These “days of tranquility” were repeated annually, leading to vaccinations of 250,000 children. Since then, negotiations with combatants to permit polio vaccinators to do their work safely have led to successful programs in rural Peru during the Sendero Luminoso conflict, in the wars in Democratic Republic of the Congo and, as we speak, in Afghanistan.

Prevention is also about the way war is conducted, for example, how checkpoints are operated, how collateral damage to hospitals can be avoided. The ICRC study found, for example, that most of the damage to hospitals was not because of deliberate targeting, which suggests a need to change military protocols and practice to assure respect for health facilities. Here again the Obama Administration deserves some credit. The Department of Defense will be hosting a workshop next fall, in collaboration with the ICRC, to explore how militaries throughout the world can better insulate health care services from violence.

Third, we need a robust system of accountability. The UN Security Council took an important step last summer by including attacks on health facilities and children in its mechanism for naming and shaming serial perpetrators of human rights violations against children in war.

Governments and civil society groups are becoming engaged to pursue this strategy. And its’ not just traditional advocates like human rights and humanitarian organizations. Groups like IntraHealth International, devoted to resolving the dire shortage of health workers in low income countries, recognizes that expanding human resources for health requires a secure environment. Domestic and international medical and nursing organizations are getting on board.

So there is reason for optimism. But the initiatives are nascent and fragile, and there is a need for continued and strengthened U.S. leadership. The World Health Organization will not be able to engage in systematic documentation without additional resources. Adherence to norms won’t take place unless it becomes a diplomatic priority, with the U.S. and other states using their considerable leverage to demand adherence to international law. The Administration’s responses to the attacks on health care in Bahrain were insufficient. We need a far more vigorous approach, where perpetrators face consequences for their abuses. Finally, we need to get our own house in order. The Department of Homeland Security continues to interpret some anti-terrorism laws so broadly – far beyond the language Congress wrote – to punish individuals who engage in the ethical practice of medicine and nursing by deeming the provision of impartial medical care to people on lists of alleged terrorists groups to be a form of material support to terrorism.

Health care is needed most when people are vulnerable and insecure. Health care providers all over the world put themselves on the line to carry out their own responsibilities to provide care. We owe them, and the people they serve and the facilities where they work, protection. We have the capacity to do it and the cost is not great. It is just a matter of will.