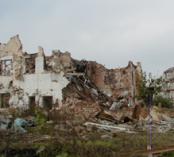 But reports of doctors and other health workers being attacked for the work they do are on the rise. Domestic and foreign medical workers have been threatened, arrested, injured, and even killed, often for politically motivated reasons such as providing medical care for injured anti-government protestors. Physicians for Human Rights (PHR), has been documenting these attacks since 2011 in efforts to end the abuses amid growing international concern.

Last December, the United Nations (U.N.) General Assembly passed a resolution affirming protection from violence for medical personnel, patients, and health facilities. The resolution reveals the extraordinary challenges of providing care in conflict zones. The Reporter talked with Widney Brown, director of programs at Physicians for Human Rights, about the problem of violence against health workers and the importance of committing to medical neutrality.

Reporter: Why was the U.N. resolution needed?

Brown: Long before the Geneva Conventions, there was a prohibition against attacking hospitals, ambulances, and medical personnel. That norm is increasingly being eroded. While we have historically seen cases of doctors and medical facilities under attack, in the last four years, we’re seeing it on a more systematic basis and, quite frankly, on a level that’s pretty much unprecedented. We fear that in conflict situations, attacking hospitals and health personnel will become the new normal.

When doctors and hospitals are attacked, what are the effects on civilian populations?

People with kidney disease, heart disease, cancer, or other diseases who require treatment suffer short-term consequences. Suddenly, there aren’t facilities or doctors to treat these common conditions. Long-term consequences happen when your immunization program is destroyed. Diseases that were largely eradicated are making a resurgence, such as polio in Syria. We’ve seen vaccination teams in Nigeria and Pakistan being targeted and killed. So the kids aren’t getting the vaccines and the potential for a disease to take hold and really spread throughout the population is significant.

The full article continues at https://www.aamc.org/newsroom/reporter/april2015/429732/international.html on the Association of American Medical Colleges’ website.