Universal Healthcare Coverage by 2030? But Are We Forgetting Something? 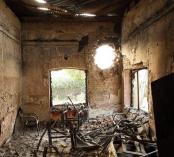 Violence against health care facilities and health workers is one of the most crucial yet overlooked humanitarian—and global health—issues today.

The US military’s bombing of the MSF hospital in Kunduz, Afghanistan, last weekend illustrates the vulnerability of health care facilities and health workers during armed conflict and the all too common violation of international law. Early Saturday morning, 12 MSF staff members and ten patients, including three children, were killed; 37 people were injured including 19 staff members, during the bombing. The MSF hospital was the only facility of its kind in the whole north-eastern region of Afghanistan, providing free life- and limb-saving trauma care. Now it’s gone.

Although tragic, this is not a standalone case. Since the conflict in Syria began, at least 156 medical personnel have been killed via execution or torture, 654 medical personnel and 295 facilities have been attacked. In Yemen, 15 million people have lost access to basic healthcare due to ongoing conflict. According to the International Federation of the Red Cross since 2012 there have been 2,300 reports of violence or threats of violence against health workers.

Two weeks ago, on September 25th 2015, the international community gathered in New York for the 70th session of the United Nations General Assembly and set the post-2015 development agenda in the form of 17 Sustainable Development Goals (SDGs) and 169 associated targets. Goal 3 hopes to: ‘Ensure healthy lives and promote well-being for all at all ages.’ An important target is featured at 3.8:

There has been much discussion over the efficacy of the SDGs: including criticism for being too broad, too many goals, with too many indicators. In fact, the UN is receiving criticism for what it is most proud of about the SDGS, for being inclusive and overarching on broad issues.

The 15–year development framework lacks fundamental insight into achieving Goal 3. How can we achieve Goal 3 without ensuring the safety of health workers and health services they provide during times of conflict? With over 25 conflicts currently taking place globally, access to healthcare for all relies heavily on the safety and protection of health workers.

The international community, at least in theory, understands this. In December 2014, the UN General Assembly resolution, “Global health and foreign policy,” created a roadmap for states and UN agencies to strengthen protection of health care in situations of armed conflict or political violence. It laid out specific preventive measures to enhance and promote the safety and protection of medical and health personnel and to promote respect for their respective professional codes of ethics.

So in theory health workers are protected. But in reality? They are being attacked as a weapon of war.

The deplorable attack on an MSF hospital this week internationally shed light on the atrocities against health workers and facilities that have been occurring for a very long time and the failure to follow international law that protects health workers. Many of our coalition members and civil society organizations around the world are unsatisfied by the US government’s response. The events of last weekend should stimulate action to protect; we need to do more awareness raising and we need to push for more action. Now is the time to make sure our leaders fulfill their promise of protection for health workers, and uphold all states on theirs, and hold violators accountable.

So, while 193 member states travel home this week after a successful UNGA, they will begin to work towards 2030, and achieving the 17 agreed goals. States need to be reminded, something that they already know—that a safe global health workforce and protected health services is integral for achieving SDG3 and universal health coverage.