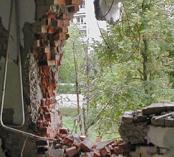 Last week, the World Health Organization’s Executive Board took an important step toward protecting the lives of health workers and patients in conflict zones by passing a resolution that calls on the WHO Director General for leadership in documenting evidence of attacks against health workers, facilities, and patients in situations of armed conflict. A coalition of international nongovernmental organizations, including IntraHealth International, sought this provision as part of its efforts to increase documentation of these attacks and to develop strategies for prevention. The lead sponsors of the resolution were the United States, the European Union, and Japan.

In situations of armed conflict and civil unrest, attacks on civilian health workers and facilities happen all too often. This type of violence infringes on basic human rights and obstructs access to health care. Because attacks usually go unreported, it has been challenging to develop strategies to prevent future attacks and to stimulate the political will to demand that perpetrators be held accountable.

“This is an important step in elevating the importance of keeping health workers safe,” said Maurice I. Middleberg, coalition member and vice president for global policy at IntraHealth. “The dearth of health workers is already a major barrier to essential services among the poor and vulnerable. Violence or the threat of violence completely undermines efforts to remedy this problem. Health workers are killed, injured, kidnapped, are unable to reach patients or flee,” he said.

The resolution calls on the WHO Director General:

to provide leadership at the global level in developing methods for systematic collection and dissemination of data on attacks on health facilities, health workers, health transports, and patients in complex humanitarian emergencies, in coordination with other relevant United Nations agencies, the International Committee of the Red Cross, and intergovernmental and nongovernmental organizations, avoiding duplication of efforts.

Leonard Rubenstein, a senior scholar at the Center for Public Health and Human Rights, Johns Hopkins Bloomberg School of Public Health, led the initiative to seek passage of the resolution and gave a statement at the WHO Executive Board meeting in Geneva on behalf of the World Medical Association, IntraHealth, and other NGOs. The resolution was a product of collaboration with the WHO Secretariat, the US Government, and other governments.

The resolution also calls for the WHO “to provide a report to the 67th World Health Assembly, through the Executive Board, and thereafter every two years, on progress made in the implementation of this resolution.”

“Over the longer term,” said Middleberg, “systematic data collection will be the basis for developing prevention strategies and holding perpetrators accountable.”