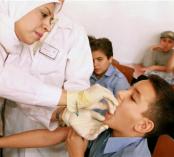 GAZIANTEP, 2 September 2015 (IRIN) - In Syria's brutal civil war, the announcement in late January that the country had effectively beaten polio again was a rare bright spot.

It was the result of an unprecedented vaccination campaign in almost all areas of the country, including in the vast eastern region controlled by so-called Islamic State (ISIS).

But even this small achievement is now threatened as the Islamist militants have cracked down on aid groups, and others have been scared off by counter-terrorism measures.

Ahead of a major push to immunise children across the country, what chance do the more than one million children living under ISIS in Syria have of getting the jab?

In October 2013, for the first time since 1999, Syria confirmed the re-emergence of polio, an incurable and debilitating but easily preventable disease. The waterborne virus thrives in areas of poor sanitation, malnutrition and weak public health systems. Conflict-hit Syria and Iraq, as well as neighbouring countries hosting refugees in cramped conditions, are ideal breeding grounds.

The 2013 announcement sparked a major immunisation campaign, and, in January 2015, the World Health Organization was able to announce there had been no new cases in a year.

The emergence of ISIS, which claimed control of vast swathes of eastern Syria and western Iraq last summer, has put that success in jeopardy.

The militants’ attitude to NGOs has hardened over time. Initially, while some aid groups were kicked out, many were able to remain, provided their work was purely humanitarian.

Orhan Mohammed, head of the Assistance Coordination Unit, a humanitarian organisation aligned to the official Syrian opposition, told IRIN late in 2014 that ISIS had allowed polio vaccination teams in.

But the situation changed this year. In February and March, the militants cracked down on aid organisations, both foreign and Syrian, working inside their territory. Only a handful remain active in ISIS-controlled areas, and the militants are now making political demands that aid groups are unwilling to meet.

“They don’t want to leave the doctors to work by themselves to provide the vaccines,” Mohammed said. “They want to put a prince from their caliphate and put him over the doctors. We didn’t accept that.”

Boraq al-Basha, Managing Director of the Syrian Relief Network, an umbrella group representing more than 60 Syrian NGOs, said he had also witnessed increased hostility to aid groups since the beginning of the year. “[ISIS] consider themselves as the state,” he said. “They consider anyone from NGOs non-believers or spies, so they stopped projects.”

A number of international NGOs that receive funding from the United States and other Western countries have also ceased to work in ISIS-held areas due to fears of counter-terrorism legislation. Aid groups can be more liable to prosecution if they are deemed to be supporting a terrorist organisation. In Somalia in 2011, NGOs said similar legislation prevented them from doing work that could have saved the lives of thousands who died of famine.

While the ACU doesn’t work in ISIS territory, the organisation is head of the Syria Immunization Task Force. Mohammed explained that it had been almost a year since some ISIS-held areas had been vaccinated, and there was now a “big chance” of an outbreak.

The exact number of people living in ISIS-controlled Syria and Iraq is unclear, but it could be as many as 10 million. Anecdotal evidence suggests that some displaced Syrians have been moving intentionally to the relative calm of those areas, often to flee the barrel bombs dropped by the Syrian government.

Adam Coutts, a public health expert specialising on the impact of the Syria crisis, said there were particular fears about the city of Deir az-Zour, where anoutbreak of polio was confirmed in 2013.

"There is a significant concern given the interruption to immunisation and the fact that the [original] outbreak clusters were concentrated in Deir az-Zour, [which is] now under ISIS control."

In recent weeks, however, Mohammed said NGOs had noticed a new willingness to talk from ISIS.

The planned vaccination campaign is due to begin at the end of this week and Syrian NGOs are making renewed overtures to encourage the militants to allow them to work.

“Today they seem to be a bit more flexible and they are giving signals that they may give us a permit,” said ACU’s Mohammed. If they open that door [vaccination teams] will go through.”

“[But] until today they didn’t give the permit,” he added.

The head of a Syrian medical organisation working inside ISIS territory – who did not want to be named for security reasons – said intermediaries were working hard to encourage the militants to allow the vaccination campaign again.

“For us it is really difficult to know, ISIS is really unpredictable – we don’t know how they will react,” he said. “But we cannot fail, we have to succeed. We hope we can do it.”

This article continues at http://www.irinnews.org/report/101943/will-islamic-state-allow-polio-drive