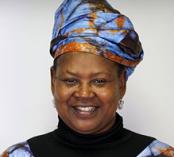 Last month, First Lady Michelle Obama bestowed one of ten International Women of Courage Awards to Fatimata Touré for her daring work to help women during the brutal occupation of Gao, Mali, in 2012 and 2013. She is head of the Women’s Action, Research, Study, and Training Group (GREFFA) and the current leader of the Regional Forum on Reconciliation and Peace in Gao.

IntraHealth International’s country director in Mali, Dr. Cheick Touré (no relation), nominated her for the award.

When Gao was attacked in 2012, extremist rebels took over the local hospital and turned many clients out of their hospital beds and onto the streets. Fatimata Touré helped find these women, and made sure they found shelter and care. As the conflict continued, Touré counseled and sheltered victims of rape and forced-marriage, and at great personal risk, spoke out publicly against the perpetrators. Rebels threatened her, robbed her at gunpoint, and broke into her home. She hid under her bed and continued to document the acts of violence using her mobile phone, determined to make sure the abuse victims suffered would not be ignored or forgotten.

IntraHealth collaborates with GREFFA on its fistula care work in northern Mali. Laura Hoemeke and Margarite Nathe spoke with Fatimata following the award ceremony. Below are excerpts of their conversation; for more, visit the IntraHealth website.

Were you ever scared during the crisis? Did you ever consider fleeing?
My nature is to not be afraid. Even when my family put pressure on me, deep inside I felt that I could not leave, should not leave.

During the first few nights after the rebel occupation, we did not sleep well. We heard gunfire all night long…but then we got used to it. It is strange, but you get used to it.

During the two most intense months of the crisis, I was too busy to think about leaving.

After the few first months, I did go to Bamako, but had to go through Niger to get there. I realized that I needed to get to Bamako to let people know what was going on and to try to get some more supplies.

How will the conflict affect the futures of young women of Gao?
That is a difficult question. What I know is that it will. For one thing, the schools are not yet fully functional, and we’re worried about that.

And there are the women who were raped. Some of them had children after being raped. We helped take care of these women. We tried to help them become more resilient, through counseling and by connecting them to income-generating activities. Some of them are getting by, but others are still traumatized. They cannot move on.

One woman was held and raped, night after night, day after day. We are trying to help her, but her spirit has been crushed.

GREFFA provides social support, and we take victims to the hospital for medical support.

How did you feel when you received the International Women of Courage Award from Michelle Obama?
It was like my head was in the clouds. I felt like I was outside of my body. My head was completely empty. The First Lady of America hugging me? I felt like I was dreaming, like I would wake up.

This award is already changing my life. In some ways, I have been working in the shadows. Now I am all of a sudden in the limelight. This is good because it calls attention to the real issues. But it is also bad, because it means the rebels may target me even more now.

My main challenge, when I go back to Mali, is to live up to the honor of winning the Women of Courage Award. I owe it to my community, to IntraHealth—and even to Michelle Obama—to show that I am worthy of this honor.

IntraHealth International is a steering committee member of the Safeguarding Health in Conflict Coalition, which promotes the security of health workers and services threatened by war or civil unrest. The coalition monitors attacks on and threats to civilian health; strengthens universal norms of respect for the right to health; demands accountability for perpetrators; and empowers providers and civil society groups to be champions for their right to health.