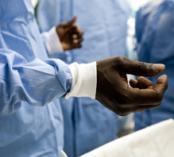 14 AUGUST 2015 ¦ GENEVA – Ahead of World Humanitarian Day, WHO is drawing attention to continued attacks on health staff and health facilities. In 2014 alone, WHO received reports of 372 attacks in 32 countries on health workers, resulting in 603 deaths and 958 injuries, while similar incidents have been recorded this year.

“WHO is committed to saving lives and reducing suffering in times of crisis. Attacks against health care workers and facilities are flagrant violations of international humanitarian law. Health workers have an obligation to treat the sick and injured without discrimination. All parties to conflict must respect that obligation,” says Dr Margaret Chan, WHO Director-General.

In a new initiative to honour health workers, WHO will launch an online platform to recognise the efforts of doctors, nurses and other staff, and also remind Member States and parties to conflict to uphold their commitments to protect health workers and the broader health system. An online campaign #ThanksHealthHero aims to gather tributes to honour the efforts of health professionals. Between World Humanitarian Day and the World Humanitarian Summit in May 2016, people around the world are invited to send messages of thanks via social media.

The campaign serves to draw attention to the threats faced by health workers and the need for intensified action to protect them. In 2015, hundreds of health workers have died in conflict zones and when fighting disease outbreaks such as Ebola. For instance, in Yemen five health workers were killed and 14 injured in June. In West Africa, of the 875 health workers infected with Ebola, 509 died.

Ongoing, repeated and targeted attacks on health facilities have also been increasingly reported. In Yemen alone, 190 health facilities are non-functional and another 183 partly functional as result of the ongoing conflict, including 26 health facilities that have been attacked since May 2015. Similarly, in Iraq, more than 180 front line health services in 10 governorates have been suspended, leaving millions of refugees, internally displaced persons and host communities without access to health care.

Aggravating these difficulties is the lack of funding for medical supplies, equipment and additional health workers. Currently, WHO and partners require more than US$1.7 billion to support their response operations for more than 60 million people in 32 emergencies. WHO alone requires more than US$530 million – less than 30% of which has been received.

As the lead agency in coordinating the health response to international emergencies, WHO is strengthening its global capacities, and forging closer links with humanitarian partners. The agency’s goal of ensuring the attainment by all peoples of the highest possible level of health requires protecting health workers, as there can be no health without a health workforce.

This article was originally published on the RefliefWeb website at: http://reliefweb.int/report/world/world-humanitarian-day-who-honours-health-workers-calls-their-protection.