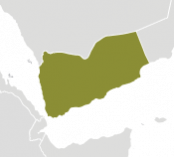 War has escalated again in Yemen. The April ceasefire agreement came to a violent end with suspension of peace talks on 6 August. From Saada governorate in the north to Taiz governorate in the south, intense airstrikes have resumed and an MSF hospital in the northern city of Abs was hit by a Saudi-led coalition airstrike on 15 August. The damage from this attack is substantial: 19 people were killed and 24 were injured. For security reasons, MSF evacuated personnel from six MSF-supported hospitals in northern Yemen, where civilian casualties from airstrikes have been most intense.

“We talk about this airstrike because MSF was present in this hospital, and this is now the fourth MSF facility that has been attacked in the last 12 months. But there are other health centres, schools, markets, bridges … which have been attacked and destroyed by airstrikes, shelling or bombs,” said Hassan Boucenine, MSF head of mission in Yemen. “Such attacks create direct victims but the war also causes a lot of indirect victims within the population (economic failure, access problems, closing of hospitals, no health staff, etc).”

The indirect victims of conflict are numerous. They include people who are unable to access medical facilities for treatment – for example, patients requiring blood transfusions or women requiring emergency caesarean sections. Even where a medical facility is functioning, it will likely lack the capacity to provide medical care due to shortages of key supplies, personnel or medicine, or have no fuel to run its generator. Some health facilities are simply too dangerous to reach, so people have to make do without. On top of that, the war has caused Yemen’s economy to all but collapse, leaving many people with little or no income. Many have to choose between buying medicine and buying food for their family.

“Now that the violence has resumed, traveling to seek care is life-threatening,” says Laurent Sury, MSF’s head of emergency programs. Consequently, in the city of Haydan, located in Yemen’s northern Saada governorate, people are not traveling for health care, MSF has found.

In July, Haydan’s hospital was operating at full capacity and the MSF team provided 60 to 80 daily consultations. “Since the beginning of August, people are not traveling for care because they are afraid of using roads or they fear the hospital will be targeted,” said Sury, though the trip may be risked for emergencies, as was the case on 13 August. Two days before the Abs hospital airstrike, the MSF team at the Haydan hospital admitted 38 children after an aerial attack on what witnesses described as a Koranic school. Ten children were dead upon arrival, and 28 others who were wounded were stabilized before being transferred to the MSF-supported Al Jumhori hospital in Saada.

The full article is available on the MSF website, where it was originally posted: http://www.msf.org/en/article/yemen-armed-conflict-intensifies-once-agai...